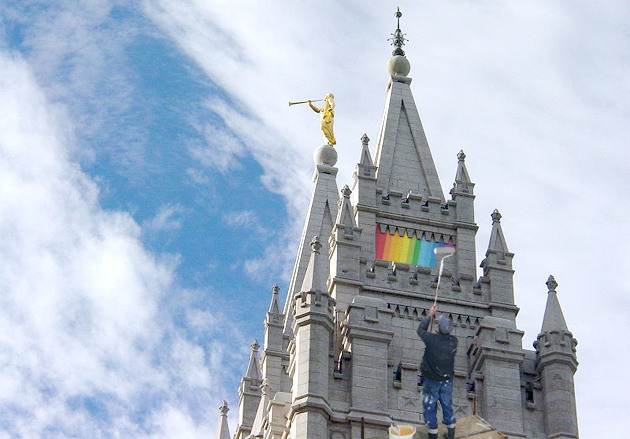 Reports that the Mormon church had given up the fight over gay marriage were premature. Earlier this year, Mother Jones and other news outlets noted the Church of Jesus Christ of Latter-Day Saints was making a concerted effort to mend its tortured relationship with gay members and their families and to stay out of divisive political fights over gay marriage. The church sat out virtually every state ballot measure on the issue in 2012, helping assure that marriage equality bills passed in Maine, Maryland, Minnesota, and elsewhere. It launched a website, mormonsandgays.org, to urge better treatment of LGBT members. Mormons even marched in pride parades in Salt Lake City.

Now that the 2012 election is over, and Mitt Romney, the nation’s most famous Mormon, is no longer running for president, it seems the church is back in the ring. This week, the Hawaii state legislature began a special session to consider a bill that would legalize gay marriage in the state. The church is actively working to kill that measure.

The letter was not the full-throated call to action the church issued during the fight over California’s anti-gay marriage measure, Proposition 8, when church leaders read letters directing members to “do all you can to support the proposed constitutional amendment by donating of your means and time.” The September Hawaii letter was far subtler, and even acknowledged that some Mormons might actually be in favor of the marriage bill. Nonetheless, it urged members to “review” the church’s “proclamation to the world,” a 1995 speech given by church president Gordon Hinckley that spelled out the church’s belief that marriage can only be between a man and woman. This latest letter also recommended members donate time and resources to groups working on the bill, though it didn’t say on which side they should be working.

The church also suggested that regardless of how members felt about the marriage bill, they should advocate for an exemption that would protect religious organizations from having to perform same-sex marriages and to allow individuals and small businesses to refuse to cater to such marriages (a nod to the famous cases of photographers and bakeries that have refused to serve customers celebrating a same-sex wedding in states where it’s now legal). The language the Mormon church favors mirrors the religious freedom argument the Catholic Church has adopted in its fights over everything from contraceptive coverage to gay marriage.

But Salt Lake City’s focus-grouped language didn’t sit well with Hawaii church leaders, who wanted a more forceful message. On October 13, Hawaii church leaders read another letter to their flocks, this time stating flatly that the church’s position on same-sex marriage had not changed and that the church “is opposed to the proposed legislation in Hawaii.” The state church’s letter argues that traditional marriage is “fundamental to successful families and a strong society,” and directs members to actively oppose the legislation.

Cynics have suggested that the Hawaii campaign is evidence that the church was only temporarily backing away from the marriage fight to help Romney. Among those cynics is Fred Karger, a former California GOP political consultant who came out publicly at age 54, and became a same-sex marriage advocate. During the Prop. 8 battle, Karger helped publicize the fact that the Mormon church was directing millions of dollars into the campaign for the measure and attempting to hide its involvement.

Karger thinks what’s happening in Hawaii now is standard operating procedure for the church. Hawaii has a large Mormon population, and the church operates a large campus of Brigham Young University there. After Hawaii’s supreme court ruled in 1993 that a ban on same-sex marriage likely violated the state’s constitution, the LDS church got to work and organized a major lobbying campaign that was instrumental in the passage of a state constitutional amendment that allowed Hawaii’s legislature to ban gay marriage, which it did, in 1998.

Karger unearthed documents from that time that show the extent to which the church was involved in the amendment fight, and the lengths to which it attempted to hide its involvement, including starting a front group to help disguise donations from Mormon contributors. (You can find the documents here.) In the wake of the Hawaii supreme court decision, the LDS church developed an extensive national lobbying campaign through its public affairs committee that would rival that of a big corporation, Karger says, with operations fighting marriage equality in virtually every state. During the Prop. 8 fight, Karger obtained internal church documents showing involvement of high-ranking church officials in the campaign. (Those documents are now public for the first time and can be found here).

Because of the Mormon church’s long history of hiding its extensive lobbying efforts to oppose same-sex marriage, Karger questions whether it has fully disclosed its current role in Hawaii. On Friday, Karger filed sent a letter to the state’s ethics commission suggesting that the church is violating Hawaii’s ethics laws by failing to register its employees as lobbyists. Hawaii has a fairly low threshold for requiring lobbyists to register with the state. Anyone working on an issue as part of their employment who spends more than $750 or five hours on an issue in a month must register within five days.

Karger points to a Deseret News story from October 15 that indicated the church had several lobbyists working the Hawaii Legislature to craft some sort of religious exemption in the bill. As of October 24, though, the church has only one lobbyist registered—Linda Rosehill, a woman who served as the church’s lobbyist in the 1990s. State records show she didn’t officially register until September 25, almost two weeks after the church first issued its call to arms in local wards (what Mormons call individual churches).

In his complaint, Karger suggests that employees of church-owned BYU have been actively recruiting students to work on the campaign opposing the same-sex marriage bill. He notes that BYU’s Hawaii campus president, Steven Wheelwright, and his family donated a hefty $225,000 to the Prop. 8 campaign in California.

Wheelwright did not respond to a request for comment. Officials in Salt Lake City would not answer questions about why the church didn’t get involved in state marriage battles last year but are doing so now that the presidential election is over. A spokeswoman suggested asking a “political science” professor about that issue and forwarded the following statement from Owen Matsunaga, a local church leader in Hawaii:

The Church’s position in relation to same-sex marriage is unchanged. The Church is opposed to the proposed legislation in Hawaii for two reasons: first, it attempts to redefine marriage.  The Church is firm in its belief that marriage as the union of a man and a woman is most beneficial to children, families, and society. Second, the protections offered in the current draft are completely inadequate to safeguard constitutionally guaranteed religious freedoms. These are important issues that affect the most vital aspects of society and thus deserve careful scrutiny.

The Church’s opposition to this legislation does not reduce our regard for all children of God, including individuals who choose to live by other standards. It does confirm our conviction that traditional marriage and robust protections for religious freedom are foundational issues for successful families and a strong society.

The church’s reappearance in the anti-gay marriage lobbying force in Hawaii has disappointed Mormons who had hoped the church’s position was changing. Mitch Mayne is an openly gay Mormon who in late 2011 was appointed executive secretary to the bishop of a San Francisco Bay Area ward in California. His appointment has been cited as an example of how the LDS church is trying to change its approach to LGBT issues. Mayne wrote a Huffington Post piece earlier this month lamenting the church’s position on the Hawaii bill and its new attempt to soften its tone by invoking religious freedom. He was particularly upset by the church lobbying to win an exemption in the bill that would allow businesses and individuals to refuse to serve LBGT customers. He wrote:

We wouldn’t like it if those same businesses hung signs that read “No blacks,” and we would be outraged if they hung signs that said “No Mormons.” In fact, if we took a moment to look at our own history, we’d see that we’ve faced that same intolerance and exclusion from others in the not-so-distant past, yet here we are advocating for it to be done to another group inside our human family. That’s simply indefensible, scripturally or otherwise.

In an email, Mayne reiterated what he said in Huffington Post, writing, “While it’s disappointing that any Mormon would stand against something that for many others is clearly the Christlike thing to do, marriage equality remains a question of when—and not if. Our Savior is watching over this one, too. We need not fear.”