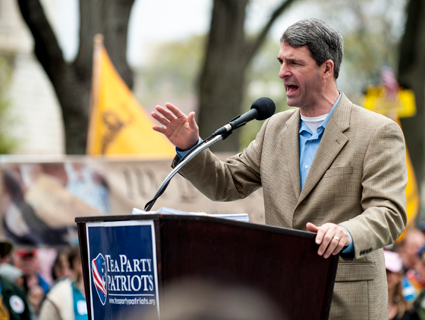 In retrospect, maybe the sodomy part was a mistake. Republican Ken Cuccinelli goes into today’s gubernatorial election in Virginia expected to lose to Democrat Terry McAullife, a man who almost missed the birth of a child to attend a fundraiser and once downed shots of Puerto Rican rum on morning television. The Most Quoted Man in Washington, University of Virginia political science professor Larry Sabato, has summed up the election as two people “running against the only people they could beat”—and Cuccinelli, well, couldn’t.

Why? There were a lot of contributing factors: McAuliffe outspent Cuccinelli by about $14 million, living up to his reputation as a relentless fundraiser. Cuccinelli’s swan dive coincided with the government shutdown in October, which was especially painful to Virginians. A third-party candidate, Robert Sarvis, took up a protest vote that might otherwise have gone to Cuccinelli. And both Cuccinelli and sitting GOP Gov. Bob McDonnell were tied to a slow-burning political influence scandal.

But perhaps the simplest explanation for Cuccinelli’s struggles is that Virginians found him and his running mate, E.W. Jackson, to be uniquely unlikable politicians fixated on uniquely unappealing issues.

Jackson, who suggested upon receiving the nomination that the presence of a black Republican on the ticket would terrify President Barack Obama, believes that yoga is an instrument of Satan, that gays are “ikky,” and that society is under attack from witches and hip-hop, which he called an “egg of destruction.” (“Eggs of Destruction” would be a great name for a death metal band, except unfortunately, Jackson has also declared death metal to be haram.) Jackson said that “gay people are sick people psychologically, mentally and emotionally.” He has also, at various points, denied saying many of those things, which would have been easier if they hadn’t been on tape and in his book.

Cuccinelli, at least, had a record as attorney general to fall back on (notwithstanding his shortcomings as a lawyer), but he chose the campaign path that offered the most resistance from 21st-century constituencies. For instance, already vulnerable to suggestions he was overly involved in people’s bedroom activities (he’d sent an volunteer to monitor a George Mason University sex fair and said the state should regulate gay sex), he opted to set up a website to advocate for the restoration of the state’s sodomy law, which was struck down by the Supreme Court in 2003. And critically, given the extension of the franchise to women just 93 years ago, McAuliffe was able to target Cuccinelli for supporting transvaginal ultrasounds for women seeking abortions because Cuccinelli supports transvaginal ultrasounds for women seeking abortions.

Are there broader lessons for Republicans going forward? That depends on whom you ask. According to a survey from Public Policy Polling, 25 percent of Virginia Republicans think Cuccinelli lost because he wasn’t conservative enough. Even so, one prediction seems fairly safe: This was the last time a major party candidate in a statewide race made sodomy laws a substantial part of his platform. Probably.