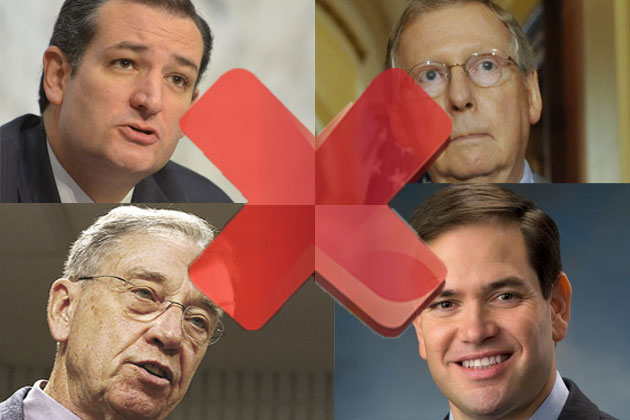 On Thursday afternoon, the Senate passed the Employment Non-Discrimination Act (ENDA), a landmark bill that would end decades of employment discrimination against lesbian, gay, bisexual, and transgender Americans. The bill moved forward with support of 54 senators who caucus with the Democrats (Sen. Bob Casey of Pennsylvania didn’t vote because he was attending to his wife’s surgery) as well as votes from 10 Republicans, only a few months after the Supreme Court ruled that the government must recognize same-sex marriages. But most GOP Senators came out against it, and House Speaker John Boehner has promised to oppose the bill, which means it will likely be killed in the House.

“One party in one house of Congress should not stand in the way of millions of Americans who want to go to work each day and simply be judged by the job they do,” President Barack Obama said in a statement. “I urge the House Republican leadership to bring this bill to the floor for a vote and send it to my desk so I can sign it into law.”

It’s already illegal for companies to discriminate against Americans on the basis of age, disability, gender, race and religion. ENDA would add sexual orientation and gender identity to the list, protecting LGBT workers from being fired or denied benefits and promotions based on their sexual identity. (An amendment pushed by Sen. Rob Portman (R-Ohio) and Kelly Ayotte (R-N.H.)? makes it so that religious entities that don’t comply can’t be penalized.) Various incarnations of this non-discrimination bill have been brought forward since the 1970s, but this is the first time the Senate has passed one. In 1996, it missed the mark by one vote,  and in 2009 and 2010, the bill was held up over the inclusion of transgender employees.

Even though Boehner has opposed the bill, citing that it would lead to “frivolous litigation“—the Government Accountability Office found there’s no evidence that would happen—there are still some Republicans who’d like to see it brought for a House vote, including Rep. Charlie Dent (R-Pa.), who told The Washington Post that he expected it would get the support of at least three dozen House Republicans, which was enough to pass the bill in the House in 2007. He noted, “Younger voters would be much more accepting of the Republican Party if we were to adopt legislation of this type.”