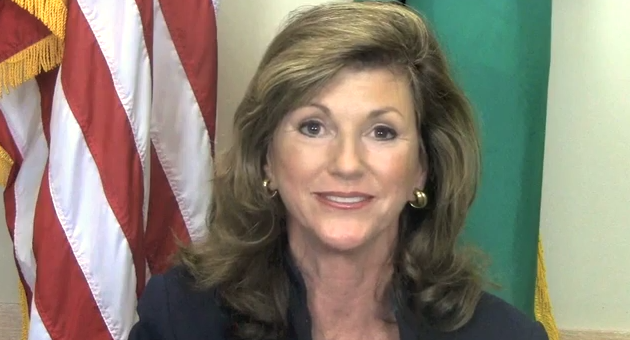 Susan Hutchinson, the chair of the Washington state Republican party, earns $20,000 less than her male predecessor, and her request for equal pay has kicked off an ugly internal spat among state GOP leaders.

The Washington GOP executive committee voted to cut the party chair’s salary from $95,000 to about $75,000 in August, shortly before Hutchinson was elected to the position. Officials cited a budget shortfall. But in an internal memo to the committee, which the Seattle Times uncovered earlier this week, Hutchinson said that the vote violated the party’s bylaws and could be seen as “discriminatory and vindictive.”

“The pay cut defies the concept of equal pay for equal work, playing into the ‘war on women’ narrative against Republicans,” she wrote.

Last week, prior to sending the memo, Hutchinson met with the committee and asked them to raise her salary to match that of her predecessor, Kirby Wilbur. But, according to the memo, her request was denied and it “soured” the committee’s mood.

“I left the meeting demoralized, and so did my hardworking staff,” she wrote. “I heard that some of you felt beat up and angry, while others were very pleased. This kind of division over something so minor is not what will move us forward.” Hutchinson added that she has already raised $22,000 for the party from her personal contacts, “which more than covers” the raise she requested.

According to the Times, Hutchinson’s memo has raised bitter feelings among her fellow Republicans:

“Republican sources told the Seattle Times some GOP leaders were dismayed by Hutchison raising the ‘war on women’ meme in her memo. They added that there has long been discussion within the party about how much the state party chair should be paid. ‘There is no war on women,’ said one GOP source familiar with the dispute.”

Despite her strong words, Hutchinson said in her memo that she’d accept the pay cut for now, in a bid to smooth things over. “Please, for the sake of the Party, put this issue to rest and don’t let it fester going forward,” she wrote. “I particularly don’t want persons outside the party to hear about the quibbling as it will undermine our fundraising efforts among major donors. We have a very positive story to tell, and together we will win!”