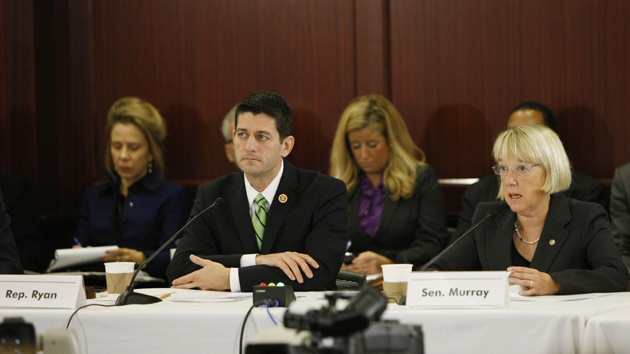 Sen. Patty Murray (D-Wash.) and Rep. Paul Ryan (R-Wis.) have spent the past several weeks huddled with their staffs in budget negotiations, and Tuesday evening they emerged with the impossible: a deal to keep the government open and avoid another shutdown when current funding expires next month. Their proposal will replace part of sequestration—the automatic cuts to domestic and military spending in the Budget Control Act that averted the 2011 debt ceiling standoff—for the next two years. Domestic and military spending will be set at $1.012 trillion for fiscal year 2014, higher than the $967 billion called for by sequestration but far less than the $1.058 trillion Murray’s original budget called for. That amounts to $63 billion in reductions to sequestration cuts over the next two years, split between defense and other domestic government programs. It’s a positive, but small step, replacing about 33 percent of sequestration for the next two years and allowing agencies to reallocate the across-the-board cuts.

The proposal covers the rise in spending by increasing a few fees—TSA surcharges for example—and cuts in pensions for federal employees and military veterans, among other small changes.* The deal creates a little more than $20 billion in net deficit reduction, though those extra cuts won’t come until 2022 and 2023. The agreement doesn’t close any tax loopholes, as Democrats originally sought, nor does it extend long-term unemployment insurance. It’s no grand bargain, just a puny accord meant to avoid the turmoil of October’s shutdown.

Despite the limited aims of the deal, conservatives—both tea party members of the House and outside groups—began complaining before negotiators released the proposal. FreedomWorks denounced the concept behind such a deal on Tuesday. Heritage Action, the outreach arm of the conservative think tank, lambasted the early reports of a deal. The Wall Street Journal op-ed page hammered the “defense hawks and appropriators who want to break the annual spending caps in current law.” A cohort of 18 of House Republicans wrote a letter calling on House Speaker John Boehner (R-Ohio) to ignore the potential deal and vote on a “clean” budget resolution.

Why were conservatives so preemptively outraged? All of the sequester offsets will come in 2014 and 2015, but the new revenues are spread out over a 10-year window. So, for example, the $6 billion in savings from federal pensions will be distributed over the next decade, averaging out to $600 million per year. Basically, the proposed deal front-loads spending that ameliorates the draconian sequester while pushing much of the deficit reduction off until later. Think of it as a minor jolt of stimulus compared to current law. That’s exactly what liberal economists have called for since the start of the recession: that the government should pump more money into the economy while it is still in the doldrums and save deficit reductions for the future when the country will, presumably, be on more stable footing.

Leaders from the two parties should be able to wrangle enough votes for the budget negotiation thanks to the stamp of approval from conservative idol Paul Ryan. “I think we will pass it through the House,” Ryan said at the Tuesday press conference announcing the deal. “I have every reason to expect great support from our caucus.” But there could still be a battle on the right. For most hardcore right-wingers, any effort to change sequestration cuts will be sacrosanct. “Sequester is the big win,” Grover Norquist, the taskmaster of Republicans’ tax agenda, said earlier this year. “It defines the decade.” Any deal that sidelines some of those cuts while shunting deficit reduction off to a later date should count as a win for progressives—and a cause for more conservative-on-Republican sniping.

UPDATE: Here’s a wonky four-page breakdown of what exactly is included in the budget proposal.

Correction: An earlier version of this article mischaracterized the nature of the pension cuts.