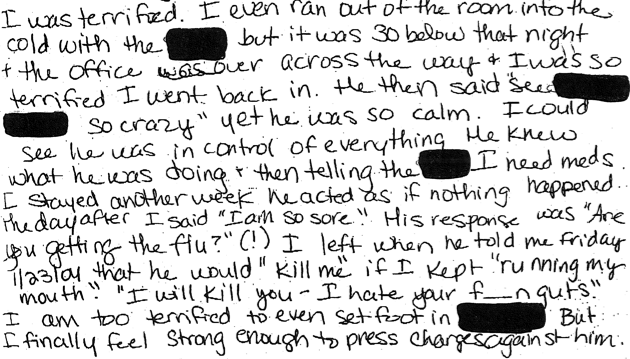 Political consultant Erick Bennett, who is challenging moderate Republican Sen. Susan Collins in Maine’s GOP primary, was convicted in 2004 of assaulting his wife. When his criminal past resurfaced, he crafted an unusual response: He said that his fight to against his conviction showed that he was a man of determination and principle. “The fact that I have been jailed repeatedly for not agreeing to admit to something I didn’t do should speak to the fact of how much guts and integrity I have,” he told the Bangor Daily News in December. Though the assault conviction has received media coverage, the full details of the case have not drawn much attention. Police records and court documents obtained by Mother Jones describe the incident, and suggest that Bennett may have trouble escaping his past.

In early 2004, Erick, his then-wife Angela, their two-year-old twins, and Angela’s eight-year-old son from another relationship were living in a motel room in Bangor, because a recent fire had damaged their apartment. Here is Angela’s description of what happened on January 16, according to the report she filed with the Bangor police. (The department redacted some names for privacy reasons.):

On Friday night, January 16, 2004, in the evening, my husband Erick Matthew Bennett assaulted me repeatedly while we were at the [REDACTED]. He did this in front of our [REDACTED]. [REDACTED] witnessed the entire assaults. First, Erick’s friend [REDACTED] had called to invite Erick and [REDACTED] to watch football the Sunday coming. I asked why [REDACTED] never invited all of us, since [REDACTED] was also married and I got along with [REDACTED]. He stated, “Because [REDACTED] doesn’t like you.” I asked why. And he said “because he thinks you’re irrational.” I said he shouldn’t say those things in front of [REDACTED] and I also said that [REDACTED] hardly knows me and I don’t want [REDACTED] around someone who says he doesn’t like me. Erick got off the bed, put both hands around my neck, squeezed my neck and said “Leave me alone.” A little later we were laying on separate beds. He was reading a Flex magazine. I said I would like to have the check my [REDACTED] sent (to help us because of our house fire 1/9) so I could start a savings account for us in the morning. I was feeling extremely nervous because he had squeezed my neck a little earlier. He got up as if to go to his coat to get the check but instead turned around toward the bed and I just knew we was gonna come after me so I got up to head for the bathroom saying, “Please Erick I’m sorry” but he grabbed me and got me on the floor and pressed me down. Then he started saying “What are you doing? Sit still? Why are you doing this?” As if I was fighting back and he needed to defend himself. At times when I could turn my head I could see him looking over at [REDACTED] to see if he was watching. The [REDACTED] were really upset [ILLEGIBLE] the ground. He pushed my head into the floor and held it there. Finally somehow he stopped and said, “Sit on the bed, I just want to talk to you.” Then he poked me in the head and said in a mean tone “Why do you do this?” I didn’t answer. He clapped both his hands over my ears. I knew I couldn’t argue with him or he would hurt me worse. This isn’t the 1st time he has hurt me. He tries to find excuses to hurt me. Fighting back makes him say I am the crazy one and he has to defend himself. So I didn’t argue or fight back at all. At one point our [REDACTED] came close and held [REDACTED] on the bed but Erick wouldn’t stop. He hit me in the head again and again blaming me for everything. He smacked me upside the head and I was terrified. I even ran out of the room into the cold with the [REDACTED] but it was 30 below that night and the office was over across the way and I was so terrified I went back in. He then said “See [REDACTED] so crazy.” Yet he was so calm. I could see he was in control of everything. He knew what he was doing and then telling the [REDACTED] I need meds. I stayed another week. He acted as if nothing happened. The day after I said “I am so sore.” His response was “Are you getting the flu?” (!) I left when he told me Friday 1/23/04 that he would “kill me” if I kept “running my mouth.” “I will kill you—I hate your f____n guts.” I am too terrified to even set foot in [REDACTED].

A little over a week after the incident, Angela took the couple’s children and drove to her parents’ house. She reported the alleged assault to the Bangor police in early February of that year. “I finally feel strong enough to press charges against him,” Angela wrote in the police report. The couple went to court in early May. After a one day trial, a judge found Erick guilty of assaulting Angela and sentenced him to 60 days in prison. The judge then waived the sentence, and ordered a year’s probation and the completion of a batterer’s intervention program.

Erick told the court he never hurt Angela. According to court records, “Erick testified that…Angela wearing high heels, tripped over her own legs and that Erick attempted to catch her, but failed, and they fell to the floor.” He told Mother Jones, “She came at me and started hitting me in the chest. I put my hands up and stopped her, and she fell…I tried to not land on her hard, and I didn’t. I did lay there a second because she was freaking out.” As for the charge that he threatened to kill her, Erick insists, “I don’t know what you’re talking about.”

Erick appealed the ruling, arguing that the court had not allowed his lawyer to question Angela thoroughly as to why she had taken a week to leave Erick and about three weeks to report the incident to the police. Erick’s lawyer contended this additional interrogation would have shown than Angela was lying about the assault. The state Supreme Court shot down the appeal later that year.

Angela and Erick divorced in 2005. She could not be reached for comment on this story.

Bennett claims that one reason he’s running for office is to try to change domestic-violence laws that he contends enable fraud. “Anything can be considered domestic assault in Maine,” he says. Bennett adds: “All I would have to do is go to the police station and write down something. Then, once I get on the stand, I just need to recite that…And that is enough to get you convicted of domestic assault…I never saw it coming.”

Christopher Almy, the district attorney for Penobscot County, where Bennett’s trial was conducted, counters that obtaining a domestic-assault conviction in Maine “is not that simplistic. It’s like any case: If there’s going to be a conviction, you have to prove it beyond a reasonable doubt, you have to have witnesses provide credible evidence. The judge would have to believe what the witnesses have to say… It’s about the same anywhere in the country.”

“We have excellent judges here,” says Jim Aucoin, the assistant district attorney who prosecuted the case against Erick. “If they found him guilty beyond a reasonable doubt, I’m sure it happened.”

Erick Bennett’s assault conviction is not the only controversy he brings to the race. He once compared Nelson Mandela to Joseph Stalin. He likened apartheid to “the system” of government under Obama. He called Maine Democratic Rep. Mike Michaud “a homo.” (“I did abbreviate ‘homo’ for ‘homosexual’ because I’m lazy,” he explains.) He is the founder of the Maine Equal Rights Center, a constitutional rights group that opposed the state’s successful 2012 ballot initiative to legalize same-sex marriage.

Bennett, who mounted a failed campaign in 2011 for mayor of Portland, says he won’t be hindered by his criminal record. “Once [voters] look past…the domestic-assault conviction,” he insists, they’ll appreciate what he stands for. If elected, he says, he will not “pass…laws that take away our rights.”