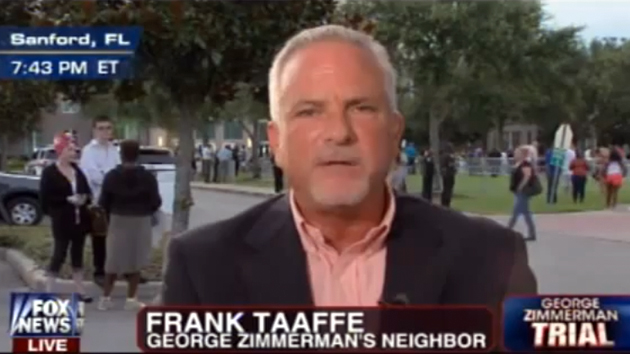 George Zimmerman’s de facto spokesman, Frank Taaffe, has recently rushed to the defense of Michael Dunn, who, like Zimmerman, was accused of murdering an unarmed black Florida teenager. Perhaps this should come as no surprise: Taaffe—a frequent cable news commentator—is an unabashed racist who has said that “the only time a black life is validated is when a white person kills them.”

On Tuesday, Political Research Associates, a liberal think tank, dredged up troubling new evidence of Taaffe’s racial animus, including audio of him calling Oprah Winfrey the N-word on his now-defunct white-power podcast, Standing Our Ground. During an episode last fall, Taaffe and his cohost discussed when to apply the slur. After being asked by a caller whether Oprah fit the bill, Taaffe launched into a rant, filled with racist language:

You can listen to the entire exchange here:

This language is not out of character for Taaffe; he has previously come out against races intermingling, defended racial profiling, and compared affirmative action to slavery. Nevertheless, cable news networks—including CNN, NBC, ABC, CBS, and Fox News—regularly tapped him for commentary on the Zimmerman case. During the recent murder trial of Michael Dunn, the Florida man who shot and killed 17-year-old Jordan Davis after a dispute over loud music, Taaffe began making the rounds again, with appearances on HLN’s Nancy Grace and Dr. Drew on Call. He was supposed to appear on CNN as well. But on Monday, after Mother Jones took HLN to task for giving Taaffe a regular platform, his booking was canceled. And Taaffe announced on his Facebook page that he won’t be making any more Nancy Grace appearances either. Here’s hoping that next time cable news networks can find a pundit who isn’t a white supremacist.