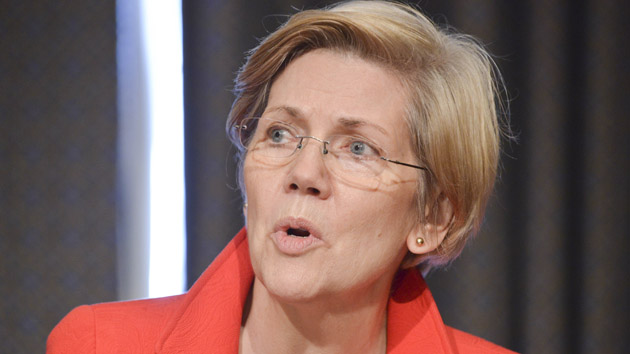 Move over, Ready for Hillary. You’ve got competition.

A group of progressive activists have unveiled Ready for Warren, a new outfit aimed at convincing Sen. Elizabeth Warren (D-Mass.) to run for president. Ready for Warren’s website asks supporters to sign a petition urging Warren to get in the 2016 race. “It’s time that the American people had a lobbyist of our own, and that lobbyist is Elizabeth Warren,” the petition reads. “By standing up to Wall Street to defend Main Street, Warren has proven herself to be the spine that the Democratic Party forgot it had.”

The Huffington Post reports that Ready for Warren’s campaign manager is Erica Sagrans, an alum of President Obama’s 2012 campaign. League of Young Voters founder Billy Wimsatt will serve as a senior adviser to the group. The group also has a Twitter account and a Facebook page.

Ready for Warren supporters will be bringing a van full of supporters to Netroots Nation, the annual gathering of progressive activists that is taking place in Detroit this week.

“We don’t want to say too much about our exact plans, but we’ll definitely be out in force and supporting Warren when she speaks on Friday,” said Sagrans, adding, “We’re planning on using Netroots as an opportunity to build on a lot of the momentum she’s seen elsewhere and to show not only that she has progressive support—because I think we know that—but that there is an organized effort and people who are working on harnessing that support and building it into a real Draft Warren campaign.”

The Ready for Warren supporters will have some competition at the conference. Ready for Hillary and its splashy bus will be there, and Vice President Joe Biden will be addressing the gathering for the first time.

Going forward, the campaign will make sure there are Warren supporters to greet her and encourage her to run as she goes around the country stumping for Democratic candidates. Sagrans said they haven’t yet decided what shape the campaign will officially take—whether it will be a super PAC or a hybrid PAC like the Ready for Hillary effort—but they’re going to step up volunteer efforts, fundraising and make sure they’re a presence in the early primary states such as Iowa and New Hampshire. An explosive amount of fundraising could be one way to entice Warren into the race.

Warren has insisted she’s not running for president. Asked by the Boston Globe about a potential White House bid, she replied, “No, no, no, no, no.” Yet there are signs that suggest she hasn’t completely closed the door on 2016. Her recently published book, A Fighting Chance, read like something a politician eyeing higher office would write. And in an interview with Washington Post columnist Ruth Marcus, Warren appeared to leave herself some wiggle room about a future presidential bid.

Recently Warren has traveled the country campaigning and raising boatloads of cash for fellow Democrats on the 2014 ticket—and in the process, raising her national profile. Her super-PAC hauled in $620,000 in April, May, and June, a four-fold increase from the previous three months.