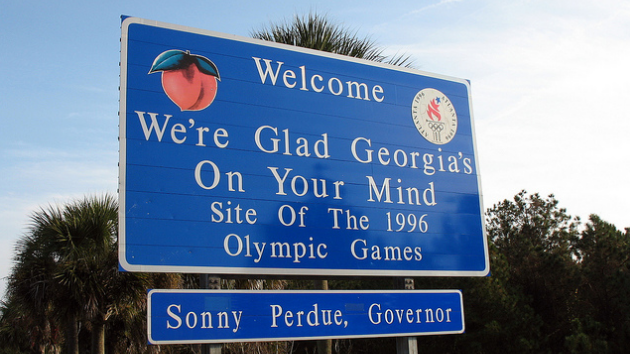 A former staffer for the Georgia Republican Party has filed a lawsuit claiming that party officials discriminated against her because she’s black and subjected her to racist slurs and comments. In one case, she alleges, a colleague called her “the house nigger.”

Qiana Keith served as the executive assistant to Georgia GOP chair John Padgett until she was fired in March, allegedly for complaining about racist treatment by fellow Republican Party staffers. Her lawsuit, which she filed July 8 in federal court, accuses the Georgia GOP and Padgett of “intentional and unlawful race discrimination” that culminated in her wrongful termination.

“Ms. Keith was terminated for consistently poor job performance,” Anne Lewis, the general counsel of the Georgia Republican Party told Mother Jones in a statement. “More than two months later, she contacted the Party through a lawyer and made claims of race discrimination and retaliation. We immediately undertook a full investigation of those claims and found that there was no merit to any of them. The Party and Chairman Padgett will vigorously defend themselves in court against these completely unfounded claims.”

According to Keith’s lawsuit, she was hired in June 2013 and “it soon became clear that Ms. Keith’s race set her apart from her co-workers, and she was treated differently throughout her employment. Keith was repeatedly…put in demeaning situations by her co-workers.”

One instance cited in the lawsuit occurred at the chairman’s annual dinner in 2013. At these events, Keith says, the chairman’s executive assistant is expected to attend as his “escort and aide.” The lawsuit alleges that “when Ms. Keith arrived, however, [a party official] had given the post to a white male.” The official, Margaret Poteet, the party’s finance director, allegedly refused to assign Keith to any official duties outside of cleaning up after the dinner.

When Keith complained about her treatment to Adam Pipkin, her direct superior, “he refused to listen to her,” the suit claims. Instead, Keith alleges, Pipkin chastised her for “seating a black member of the Republican Party at the head table with the Chairman.”

The lawsuit claims that Keith later heard Poteet complaining about her to Karen Hentschel, the party’s accounting director. “Don’t worry about her, she is just the house nigger,” Hentschel allegedly said.

Keith also alleges that Poteet asked her to pose as a member of the wait staff at a separate party event held sometime after the chairman’s dinner.

The breaking point for Keith seems to have come after she informed Hentschel that the state of Montana, where she had previously lived, would be asking the party to garnish her wages in connection with restitution she owed related to a 2002 felony. (Keith claims the party knew of her felony when she was hired.) Soon after, she alleges that she overheard Poteet tell Hentschel, “I didn’t even know there were black people in Montana.”

On February 3, after overheard this comment, Keith sent Pipkin a long email accusing him of failing to intervene, according to the lawsuit. It read, in part:

[I] refuse to be anyone’s punching bag or trash can for their issues for reasons that I know have nothing to do with my job performance. Honestly, maybe some people think I work here only because I am black and of course not valued and therefore consistently harassed and evidenced to you on a number of occasions…that is against the law as well sir…[I have] overheard racial slurs in conversations about myself…[and] racist innuendo around the office more than I would like to admit to.

Several days later, Pipkin met with Keith. Keith repeated her complaints about her treatment. Pipkin said Keith must have “misunderstood” Poteet and Hentschel, Keith claims. Her lawsuit alleges that the party never investigated her accusations of racism, which Lewis, the party’s attorney, contest.

In the weeks after this meeting, Pipkin sent Keith two emails describing her job performance as poor. The state Republican Party fired her on March 31.