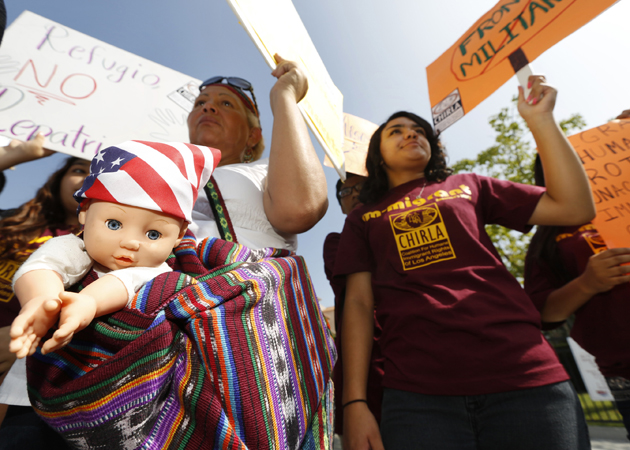 As the Obama administration continues to grapple with the humanitarian crisis surrounding unaccompanied immigrant children, some have suggested processing the children faster and moving them quickly through the immigration courts. One problem: The vast majority don’t have lawyers. The ACLU and several other groups, including the American Immigration Council, filed a lawsuit Wednesday to force the government to provide these kids with counsel as they deal with the wildly complex immigration system.

The ACLU’s suit represents eight children, ages 10 to 17, from El Salvador, Guatemala, and Mexico, but is also trying to force representation for the thousands of children who go through the same thing each year. The suit alleges that the children are being deprived of due process, citing previous case law ruling that children should have legal representation in legal matters. A 2014 report (PDF) from the University of California-Hastings and Kids in Need of Defense argues, “Without counsel, the children are unlikely to understand the complex procedures they face and the options and remedies that may be available to them under the law.”

Part of Obama’s $3.7 billion plan to address immigration issues is to provide $15 million to fund legal representation for unaccompanied children. (Notably, a 2012 report said that 40 percent of them were eligible for some sort of deportation relief.) The government says it’s also trying to recruit lawyers and paralegals to help these children, but according to Ahilan Arulanantham, the deputy legal director of the ACLU of Southern California and the senior staff attorney for the ACLU’s Immigrants’ Rights Project, “it’s pretty clear that it’s not enough.”

“Obviously, we’re happy the government is trying to do more, but this is entirely within government control,” Arulanantham says. “These are complex cases, and the question at the core isn’t about money. The question is about whether it’s fair to have them present their cases on their own.”

US Attorney General Eric Holder—a named defendant in the case—seems to agree, saying in March 2013 that it is “inexcusable that young kids…six-, seven-year-olds, 14-year-olds—have immigration decisions made on their behalf, against them…and they’re not represented by counsel.” More than a year later, though, unaccompanied kids still struggle to find pro bono legal representation, either because they and their families can’t afford it or there is simply none available.

“I wish we could have a judge or a government attorney question [her] about her case and about how immigration law works,” Arulanantham says. “It’s laughable.”