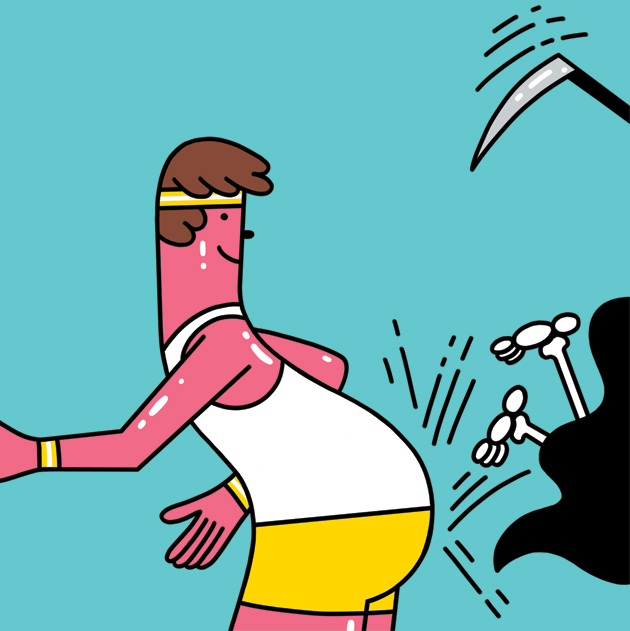 It wasn’t so long ago that fat people were considered healthy. Doctors were far more worried about underweight Americans, many of whom were too poor to afford enough calories. But as farms industrialized and food became cheaper, the tables began to turn. Shortly after World War II, it became clear that eating too much food led to just as many problems as not eating enough. Insurance companies noticed that their fattest policyholders were significantly more likely to die early than those of average weight. They searched for a way to measure excess fat and hit upon a simple formula developed in 1832 by a Belgian statistician, mathematician, and astronomer named Adolphe Quetelet: Simply divide a person’s weight by the square of his height. This formula, known as body mass index (BMI), spread from insurers to health researchers and finally, in the 1980s, entered the clinical realm.

Today, BMI is still one of the most commonly used measures of health. When primary-care physicians record your height and weight, as required by law, the electronic record they see displays your BMI. Insurance companies use it to set premiums: A 2013 report from the provider eHealthInsurance found that people with BMIs in the “obese” category paid 22 percent more, on average, than those in the “normal” range. Doctors typically use BMI to advise their patients: If you’re below 18.5, you’re underweight; 18.5-24.9 is normal; 25-29.9 is overweight; and 30-plus is obese.

There’s just one problem: A higher BMI doesn’t necessarily mean you’re less healthy. In fact, patients with heart disease and metabolic disorders whose BMIs classify them as overweight or mildly obese survive longer than their normal and underweight peers. A 2013 meta-analysis by the National Center for Health Statistics looked at 97 studies covering nearly 3 million people and concluded that those with overweight BMIs were 6 percent less likely to die in a given year than those in the normal range. These results were even more pronounced for middle-aged and elderly people. This is known as the obesity paradox. “The World Health Organization calls BMIs of 25 to 29.9 overweight,” says Paul McAuley, an exercise researcher at Winston-Salem State University. “That is actually what is healthiest for middle-aged Americans.”

And get this: While epidemiologists use BMI to calculate national obesity rates (nearly 35 percent for adults and 18 percent for kids), the distinctions can be arbitrary. In 1998, the National Institutes of Health lowered the overweight threshold from 27.8 to 25—branding roughly 29 million Americans as fat overnight—to match international guidelines. But critics noted that those guidelines were drafted in part by the International Obesity Task Force, whose two principal funders were companies making weight loss drugs. In his recent book Fat Politics: The Real Story Behind America’s Obesity Epidemic, political scientist Eric Oliver reports that the chairman of the NIH committee that made the decision, Columbia University professor of medicine Xavier Pi-Sunyer, was consulting for several diet drug manufacturers and Weight Watchers International.

So should we just ignore BMI? Not necessarily, says Carl Lavie, a Louisiana-based cardiologist and author of the new book The Obesity Paradox: When Thinner Means Sicker and Heavier Means Healthier. “It’s one tool that you can use,” he says, “but it’s not the only one, or even the most important one.” A more reliable indicator of metabolic health is the circumference of your waist relative to that of your hips. As a general rule, a higher ratio indicates the presence of visceral—or belly—fat, a risk factor for metabolic and heart disease. But while doctors must record a patient’s height and weight, they don’t have to measure the waist and hips. Donna Ryan, a physician and spokeswoman for a clinical weight research group called the Obesity Society, has trained thousands of primary-care doctors in obesity screening. She asks them to raise their hand if they use waist circumference as a health indicator, and usually only about 10 percent do. “Doctors are so pressed for time,” she explains. “And it’s intrusive. You have to put your arms around the patient.”

But there’s an even easier way for docs to gauge their patients’ risk level: Ask them how much they exercise. “It’s much more important to avoid low fitness than it is to avoid fatness,” Lavie says. Research supports this: McAuley and his team, for example, followed 831 veterans with type 2 diabetes for 10 years and found that the ones who exercised rarely and performed poorly on treadmill tests had a 70 percent higher death risk than those who got regular exercise. Fitness, it turned out, beats BMI as a predictor of mortality. Yet many physicians still don’t prescribe exercise: In a 2013 study, Lavie and his colleagues found that only a bit more than half of diabetes patients—and just 44 percent of those with hypertension—reported being counseled to exercise more.

Of course, exercise requires no prescription. So the next time you find yourself obsessing about BMI, maybe it’s time to stop crunching numbers and go for a walk.