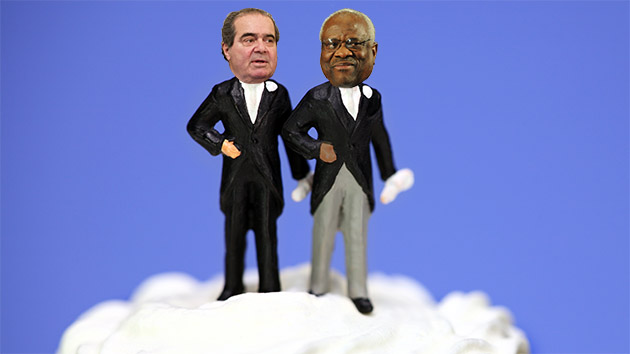 Supporters of gay marriage have been on a roll: In the past year, federal courts across the country have nullified same-sex marriage bans in more than a dozen states.

Yet these victories are complicated by the lack of a national legal standard on gay marriage: For now, it remains a state-level question. But that could change if the US Supreme Court steps in. Last week, the high court announced that it will review a package of seven gay-marriage cases from five states in late September when it chooses which cases to consider in their 2014-2015 term.

Legal experts say it’s likely that the court will hear at least one of the cases. “I think they’re going to take a case,” says Dale Carpenter, a professor of civil liberties law at the University of Minnesota law school. “The only question is which one. They know whichever they take, it’s going to be momentous.”

This cluster of cases centers on two key questions: All seven ask SCOTUS to consider whether a state law limiting marriage to a union between a man and a woman violates the 14th Amendment. Six of the seven cases also raise the question of whether states must recognize same-sex marriages performed in other states.

“I think they’re going to take a case. They know whichever they take, it’s going to be momentous.”

The Supreme Court ruled on two landmark gay marriage cases in 2013: Hollingsworth v. Perry, which overturned California’s Proposition 8, and US v. Windsor, which invalidated the Defense of Marriage Act. But neither weighed in on the constitutionality of same-sex marriage bans, leaving the choice to allow gay marriage up to each individual state. If the court takes one of these new cases, it’s likely that its decision will have a broad and more definitive impact. “Should they decide that the 14th Amendment actually protects the rights of same-sex marriage, that would have the effect of being binding on the federal government,” says Jane Schacter, a professor at Stanford Law School.

The cases before the court involve the 14th Amendment’s guarantees to equal protection under law and due process. If the high court rules that it is a violation of either promise for one state to deny a marriage license to a same sex couple, then it would become unconstitutional for any state to do so. Any state that failed to comply with the ruling, Carpenter elaborates, “would face immediate lawsuits—a complete waste of time and money.”

It’s anyone’s guess which case (or cases) SCOTUS may choose. The justices will choose between three Virginia cases, and one each from Utah, Indiana, Oklahoma, and Wisconsin. Ted Olson and David Boies, the attorneys on one of the Virginia cases, successfully argued Hollingsworth v. Perry last year. The attorney on one of the other Virginia cases is Paul Smith, who has argued multiple cases before SCOTUS, including Lawrence v. Texas in 2003, which struck down state sodomy laws. Carpenter says that the cases from Utah, Indiana, or Wisconsin might prove the most comprehensive choices for the court. “Utah, Indiana, and Wisconsin involve the marriage issue and the recognition issue and the state attorney generals are fully defending those laws. You have all the elements together in those cases,” he says. “The Supreme Court might want to just take a very clean case in which you’ve got the state squarely taking the position and defending its law.”

The Supreme Court could take multiple cases or all of them. It could also consolidate cases, something the court has done in the past with hot-button issues. (For example, 1954’s landmark Brown v. Board of Education combined six desegregation cases.) “All these plaintiffs want to be the chosen one,” says Schacter. “But it wouldn’t surprise me at all if they take more than one case.”

Here’s a closer look at all seven cases being considered by the court, and what’s at stake in each:

1. Herbert v. Kitchen (Utah): SCOTUS briefly dealt with this case earlier this year. In December 2013, a federal district court struck down Utah’s ban on same-sex marriage. Weddings began immediately. In January, the high court issued a temporary stay, putting a halt to marriages while the state’s appeal was considered. In June, the 10th Circuit Court of Appeals upheld the lower court’s ruling that the state’s same-sex marriage ban was unconstitutional.

2. Smith v. Bishop (Oklahoma): First filed in 2004, this case originally sought both to overturn Oklahoma’s ban on same-sex marriages and to recognize marriages performed in other jurisdictions. In January, a district court judge ruled that the state’s ban is unconstitutional, but dismissed the portion of the lawsuit addressing marriages from other states, ruling that the plaintiffs lacked standing. Both sides appealed to the 10th Circuit Court of Appeals, which affirmed the district court on both counts. In its appeal to SCOTUS, the state of Oklahoma is asking the court to rule exclusively on the marriage question.

3. Bogan v. Baskin (Indiana): This case began as three separate suits filed on behalf of a widow and 11 couples. Several plaintiffs have same-sex marriage licenses from other states that are unrecognized in Indiana. In June, a district court judge consolidated the suits into Baskin, and struck down the state’s ban on gay marriage. He did not stay the decision, allowing marriage licenses to be issued immediately. Earlier this month, the 7th Circuit Court of Appeals upheld the lower court’s decision.

4. Walker v. Wolf (Wisconsin): In February, the American Civil Liberties Union filed this case on behalf of eight same-sex couples, three of whom had married in other places. In March, a district court judge denied the state’s requests to dismiss the case. In June she ruled in favor of the plaintiffs, overturning Wisconsin’s ban on same-sex marriage. Her ruling was unclear on whether marriages could begin or not: Still, clerks in some cities began marrying couples immediately. Earlier this month, the 7th Circuit Court of Appeals upheld the lower court’s decision.

5, 6, and 7. Rainey v. Bostic, Schaefer v. Bostic, and McQuigg v. Bostic (Virginia): These three cases are different iterations of a suit filed in July 2013 by plaintiffs Timothy Bostic and Tony London, who seek to get married in Virginia. Carol Schall and Mary Townley joined the case in September 2013. They were legally married in California in 2008, but their union is not recognized in the Old Dominion. This has made it impossible for Schall to formally adopt her own daughter. In February, a district court judge ruled on all three cases, concluding that the state’s laws barring in-state gay marriages and prohibiting recognition of out-of-state marriage licenses is unconstitutional. In July, the 4th Circuit Court of Appeals affirmed the lower court’s ruling. A fourth case, Harris v. Rainey, a class action suit, has been incorporated into Rainey v. Bostic.