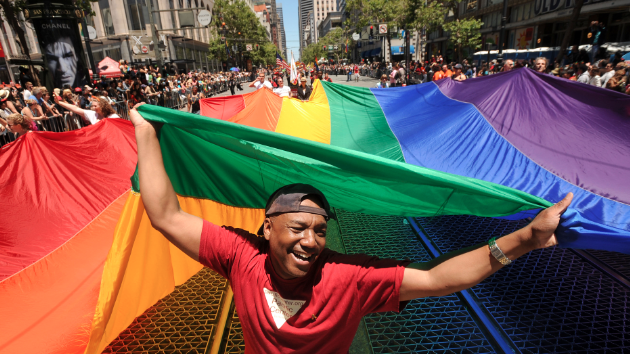 Ohio made strides toward marriage equality on Monday when a federal judge ruled that the state’s ban on recognizing same-sex marriages performed out of state is unconstitutional.

The ruling, from US District Judge Timothy H. Black of Cincinnati, overturns part of a constitutional amendment defining marriage as between a man and woman. Ohio voters approved the amendment in 2004. “The record before this court … is staggeringly devoid of any legitimate justification for the state’s ongoing arbitrary discrimination on the basis of sexual orientation,” Black wrote in his opinion.

Black didn’t clear the way for same-sex couples to obtain marriage certificates in Ohio. But it does afford Ohio’s same-sex couples the same rights under the law as any other married couple—so long as the ruling stands. On Tuesday, Black will decide whether to stay his ruling pending an appeal by Ohio Attorney General Mike DeWine.

Black announced that he would compel the state of Ohio to recognize existing marriages on April 4, after he heard arguments from three couples challenging the ban. The three lesbian couples were suing to place both parents’ names on the birth certificates of their newborn children. For the couples, the ruling is a victory no matter what—Black has said he won’t stay the part of the decision that compels Ohio to list both parents on their child’s birth certificate.

We’ve added Ohio to our animated map illustrating how fast the right to marriage is sweeping the county:

A few things to note about the map: Michigan, Oklahoma, Utah, Virginia, and Texas are not issuing marriage licenses due to the appeals, although in Michigan and Utah, several hundred couples were married in the time it took the states to prepare appeals.

The Human Rights Campaign, an LGBT advocacy organization, characterizes Wisconsin’s domestic partnerships as limited—the state law enumerates 43 rights same-sex partners enjoy, whereas married couples of the opposite sex are entitled to more than 200. Under Wisconsin law, it is illegal for same-sex couples to travel out of state in order to marry; couples who do so, and continue living in Wisconsin, risk a $10,000 fine and nine months in prison.

The map does not show the District of Columbia, which has issued licenses to same-sex couples since March 2010. California issued marriage licenses beginning in June of 2008 but stopped doing so that November, when voters passed Proposition 8. A Supreme Court decision overturned Prop. 8 in June 2013.