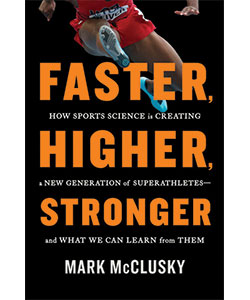 Speed-skating super-suits, motion-tracking cameras, the 10,000-hour rule—it’s all covered in Mark McClusky’s engrossing look into how athletes use science to avoid injury, train smarter, and shatter rec­ords. McClusky, the editor of Wired.com and a former Sports Illustrated reporter, digs into vaguely familiar terms like VO2 max and the oxygen deficit to suss out what separates champs from near-misses while introducing a roster of entertaining characters: a Soviet hammer-throw guru, a Wall Street analyst turned cycling star, and even a British physiologist pursuing hyperfitness back in the 1920s. The book has useful lessons for weekend warriors, but ultimately, McClusky writes, “the greatest athletes are born, and then made.”