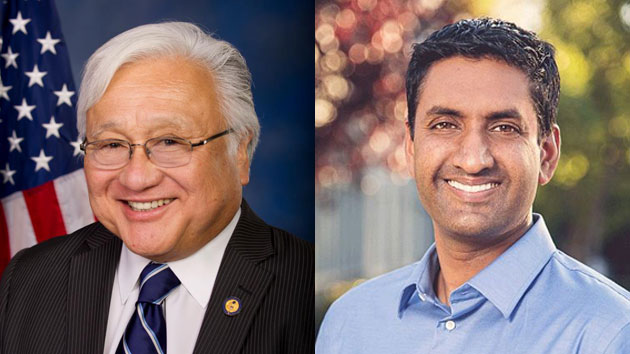 California’s most competitive and closely watched political race this year is a battle for the hearts and minds of Silicon Valley. It pits US Rep. Mike Honda, a 73-year-old, seven-term progressive backed by organized labor, against fellow Democrat Ro Khanna, a young patent attorney who has never held elected office but is bankrolled by the Valley’s tech elite.

“Honda and I basically share the same values,” Khanna told me—but they differ in their willingness to work across the aisle: “I can articulate a progressive vision that appeals to independent and Republican voters and helps broaden the appeal of the Democratic Party,” he says. “Ultimately, I think I will be a more effective messenger for Democratic values than Congressman Honda.”

The race, now in a dead heat, speaks to the rising political power of the tech industry.

Why wasn’t this fight decided in the June primary, as it would have been in almost any other state? After all, Khanna finished more than 20 points behind Honda in that contest. But California’s new nonpartisan primary system, which went into effect two years ago, allows the top two vote-winners, regardless of party, to face each other in the general election. A lot has changed since June too. According to a poll released last week, the race is now a dead heat, with Honda at 37 percent of likely votes to Khanna’s 35 percent—a difference less than the poll’s margin of error.

The race has national significance for what it says about the rising political power of the tech industry. Honda is a progressive icon who grew up in a Japanese American internment camp and spent 20 years as a schoolteacher and high school principal. But in a district that includes Apple, Cisco, Intel, and Yahoo, he is viewed by some as out of touch with the demands of the innovation economy.

Khanna often portrays his campaign as the equivalent of a tech startup—a nimble, bare-bones outfit bent on disrupting the status quo. “It’s a fair comparison in the sense that the odds of a startup succeeding are a few percent and the odds of displacing an incumbent are a few percent,” he says.

And like many startups, Khanna seems to have attracted tech donors based more on his educational pedigree and the force of his ideas than his actual accomplishments. “Politics is not a business,” Khanna concedes when I press him on the analogy. “Your job is to care about a community, to be in touch with a community, to express empathy, to care about people who haven’t necessarily had the same opportunities. Politics is much more nuanced and values-based.”

Though caricatured by the Honda campaign as “Republican lite,” Khanna certainly isn’t conservative by national standards. He supports increasing overall taxes on the rich, supports paid maternity leave and child care tax credits, and creating an Internet Bill of Rights that would outlaw mass surveillance and allow people to know how tech companies use their data. He has been endorsed by the San Francisco Chronicle and San Jose Mercury News, which wrote that Khanna “is ready for the Congress of tomorrow, while Honda is a politician of the past.”

That critique isn’t entirely fair, however, and may partly reflect Silicon Valley’s notorious ageism. Far from being out of step, Honda has cosponsored legislation that would double the number of H-1B visas. (Tech companies have long agitated for more H-1Bs.) He also pushed for a national “Entrepreneur in Residence” and passed a bill authorizing $3.7 billion for nanotechnology research.

Both men say the rich should pay a larger share, but Honda, unlike Khanna, wants to raise taxes on capital gains.

Khanna, though, has clearly done more to court business interests. He won the endorsement of the Silicon Valley Chamber of Commerce, which Honda would not meet with. And he has made an economic agenda based upon government-backed education and scientific research the centerpiece of his campaign. Those differences wouldn’t matter much in a typical Bay Area race between a Democrat and Republican, but they may prove important in a Dem vs. Dem contest in which independents and Republicans will provide the swing vote.

The most meaningful policy difference between Honda and Khanna is their approach to taxes. Both say the rich should pay a larger share, but Honda wants to go further to raise taxes on capital gains. Taxing profits from investments at the same rate as regular income, as he proposes, favors salaried workers over high-level executives, big investors, and employees at pre-IPO startups who take much of their compensation in stock or options.

“We need to make sure that everyone is paying their fair share in taxes, including millionaires and billionaires,” Honda said in a statement provided by his staff. “Warren Buffett has said that it’s wrong for him to be taxed at a lower rate than his secretary, and I agree. That’s why I was for full repeal of the Bush tax cuts which favor the most wealthy, and for taxing capital gains as regular income. I also support raising the minimum wage and increasing Social Security benefits, two policies that are crucial to reducing income inequality.”

Khanna readily admits that he’s less interested in taking from the rich to help the poor. “While there may be a disagreement [in DC] on redistributive government spending, there shouldn’t be a disagreement on productive government spending”—i.e., investments to spur the economy, he says. “I think Silicon Valley can help make that case, that there are areas of government spending on basic science and research that help make America an economic superpower. It is better to have a message that can get Republicans and independents to support a strong agenda, instead of just talking to your own group.”

I asked Khanna if he’d ever heard of the Jungle, a San Jose homeless encampment that is by some accounts the largest in the country. He hadn’t. “I should know about it, candidly,” he said. “I don’t think the tech community and those who have done well are sufficiently empathetic to that.” He talked up using public-private partnerships to build affordable housing, adding: “We don’t just live in communities with computer scientists.”

But there are clearly more of them in the Valley than there used to be, which is one reason Khanna may have a crack at going to Washington.