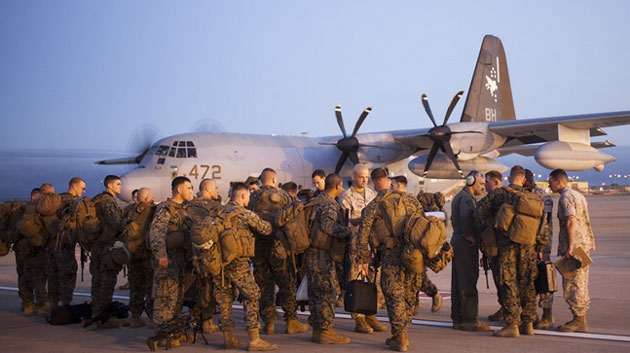 US Marines arrive in Monrovia to provide support to Liberians in the fight against Ebola.US-AFRICOM

At the request of the Liberian government, American troops have set up shop in the country to help deliver aid and build treatment centers. It’s all part of an effort to slow the disease’s spread and, hopefully, mitigate some of the outbreak’s more pernicious side effects, such as hunger.

So far, US military doctors and nurses are not actually treating patients. But three members of Congress—Rep. Keith Ellison (D-Minn.), co-chair of the Congressional Progressive Caucus, Rep. Karen Bass (D-Calif.), and Rep. Barbara Lee (D-Calif.) believe they should be.

“Our capable military medical and technical personnel have unique skills, resources, and experience working in similar environments to West Africa,” the three wrote in a letter to President Obama. “They responded to the Cholera outbreak after the Haiti earthquake in 2010 and the aftermath of the tsunami in Indonesia. We must stop the Ebola outbreak in West Africa and protect Americans from the spread of the virus.”

Pentagon officials have said that US troops will be proving logistical support and that there are no current plans for them to provide direct care. “We are not anticipating that military personnel will be treating the people,” General David Rodriguez, head of the military’s Africa Command, said at an October 3 press briefing. “There’s no intention right now that [service members] will be interacting with patients or in areas where they would necessarily come into contact with patients.”

Still, Rodriguez left open the possibility of military doctors treating patients at a later date. “That will be a decision made in the future if that ever gets to that point,” he said. “But the international community has said ‘Not right now. That’s not what we need.'”

Ebola would certainly present a risk for any military personnel treating patients. Of the more than 4,000 people who have been infected in Liberia so far, 207 have been health care workers, according to Liberia’s Ministry of Health and Social Welfare.

The Marines are already warning their personnel to take precautions, even though they’re not currently working with patients. “You must be aware of the risks,” the Corps’ top doctor says in an instructional video. “Understand what to do if you come into contact with someone suspected of having Ebola, and what to do if you become ill.”

Many conservatives were outraged that Obama sent troops to help fight Ebola. Chances are, a sick service member would give new life to that debate.