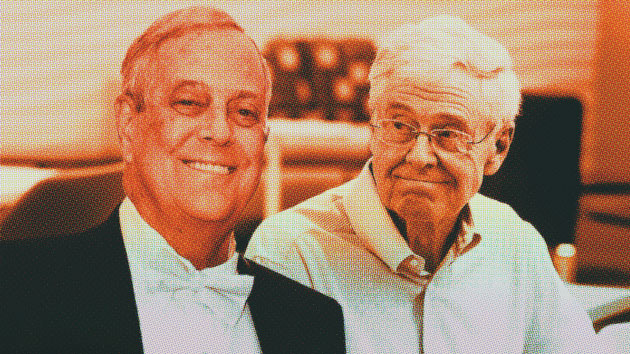 The John Birch Society likes to point out that its members were tea partiers before the tea party existed. And indeed, some of today’s conservative fears—from a socialist president to a United Nations-driven “one-world government”—wouldn’t have sounded out of place in the early 1960s, when Birch Society leader Robert Welch commanded a right-wing movement that Republican establishmentarians viewed as a mortal threat.

The connective tissue linking the Birchers of the past to today’s tea partiers meanders through the libertarian movement of the 1960s and 1970s, and detours into the tobacco wars of the 1980s and the Hillarycare battle of the 1990s. At the nexus of this throughline is the Koch family, which for more than six decades has helped to finance and cultivate the ideological uprising that has now, at long last, established itself at the very heart of Republican power. 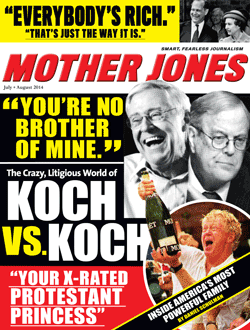 Patriarch Fred Koch—a leader of the successful effort to make Kansas a right-to-work state in the late 1950s—was a founding member of the John Birch Society. Fred was in the room the day in 1958 when Welch addressed a small group of prominent conservatives to plan a movement that would place its weight on “the political scales in this country as fast and as far” as possible. Charles Koch, a Birch Society member like his father, would later join a group of fellow Birchers committed to growing the Freedom School, a Colorado-based educational center founded by a controversial libertarian guru named Robert LeFevre.

Through the Freedom School—which taught free-market dogma and whose leader postulated that any rights the government conferred, it had first robbed you of—passed many of the luminaries who founded the modern libertarian movement, not least of them Charles and David Koch. Together, the brothers would go on to play a pivotal role in bringing the libertarian ideology (a “radical philosophy,” Charles readily admitted) to the masses.

Both Charles and David were major funders of the Libertarian Party, and in 1980 David agreed to be its vice presidential candidate—in part because, by spending part of his own fortune on the race, he could sidestep campaign contribution limits. But in the aftermath of that election, when the party grew too quixotic for their tastes, the Kochs distanced themselves from the movement and set out to affect the political process directly. With their top strategist Richard Fink, later a Koch Industries executive and board member, the brothers formed Citizens for a Sound Economy, a free-market advocacy group that specialized in rallying the grassroots around the pet issues of corporations, including Big Tobacco.

The group was at the vanguard of the fight to scuttle the Clinton administration’s BTU tax and health care initiatives. But in the early 2000s, an acrimonious internal feud pitted the Kochs against key members of its leadership, including former House Majority Leader Dick Armey. The Armey faction ended up forming FreedomWorks, while the Koch contingent rebranded as Americans for Prosperity. Both groups were key players in providing the financial and organizational support that launched the tea party.

To bankroll Americans for Prosperity and other outfits that advance their ideological agenda, the Kochs built a political machine that in size, scope, sophistication, and fundraising prowess rivals the Republican Party itself. The Center to Protect Patient Rights—run by a political consultant employed by the Kochs—initially served as a pass-through for contributions from the network of elite political donors who take part in Koch-sponsored seminars.

Later, the Kochs formed a business league—members must pay at least $100,000 in annual dues—called Freedom Partners, which was set up under a section of the tax code that could allow donors to write off political contributions as business expenses. The group’s president is Marc Short, a former vice president at Koch Companies Public Sector, the division of Koch Industries that oversees lobbying, public relations, and legal affairs.

The brothers’ representatives often go out of their way to minimize their role in the politics outfits they fund. They also insist that there is an arm’s length relationship between Koch Industries and the brothers’ political endeavors. But past and present Koch employees occupy key roles in the political organizations, and, before Freedom Partners assumed this responsibility, it was Koch Industries that organized the famous biannual donor conferences where tens of millions are raised to influence politics.

The five-member board of Freedom Partners exemplifies how closely intertwined the Kochs, their company, and their political activities truly are. It includes Freedom Partners president Marc Short, the former Koch executive; current Koch Industries general counsel Mark Holden, who is also a board member of Americans for Prosperity; Kevin Gentry, a Koch vice president who serves as one of the brothers’ chief fundraisers; and Wayne Gable, a former managing director of government affairs at Koch who once served as the president of Citizens for a Sound Economy and later as an Americans for Prosperity board member. (The fifth member is Nestor Weigand, one of Charles’ closest friends.)

Through the John Birch Society, Fred Koch tried and failed to convert the country to his way of thinking, a hardline ideology that saw the tentacles of socialism slowly choking the life out of the American self-reliance and free enterprise. His sons have carried forward the torch, and where their father and his allies were dismissed by fellow conservatives as reactionaries, the Koch brothers have risen to become Republican powerbrokers.

Their newfound influence comes thanks to their sprawling political network, a many-tentacled apparatus that has only grown in breadth, scope, and complexity since the Koch’s libertarian allies dubbed it the “Kochtopus” in the 1970s. Building on the research for my Koch brothers biography Sons of Wichita, we’ve mapped the key organizations the brothers have founded, bankrolled, or had a major influence on. 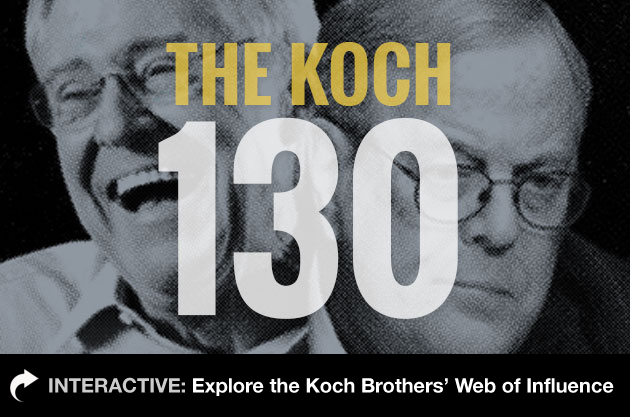