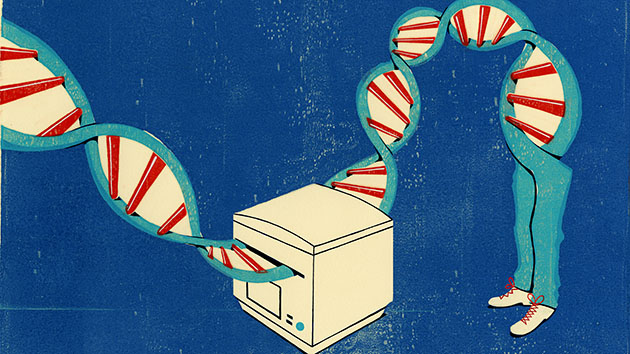 Robert Schueren shook my hand firmly, handed me his business card, and flipped it over, revealing a short list of letters and numbers. “Here is my DNA profile.” He smiled. “I have nothing to hide.” I had come to meet Schueren, the CEO of IntegenX, at his company’s headquarters in Pleasanton, California, to see its signature product: a machine the size of a large desktop printer that can unravel your genetic code in the time it takes to watch a movie.

Schueren grabbed a cotton swab and dropped it into a plastic cartridge. That’s what, say, a police officer would use to wipe the inside of your cheek to collect a DNA sample after an arrest, he explained. Other bits of material with traces of DNA on them, like cigarette butts or fabric, could work too. He inserted the cartridge into the machine and pressed a green button on its touch screen: “It’s that simple.” Ninety minutes later, the RapidHIT 200 would generate a DNA profile, check it against a database, and report on whether it found a match. 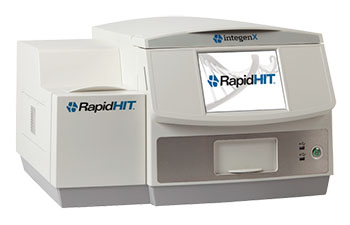 A scanner, quickly: The RapidHIT 200 can generate a DNA profile in about 90 minutes. IntegenX

The RapidHIT represents a major technological leap—testing a DNA sample in a forensics lab normally takes at least two days. This has government agencies very excited. The Department of Homeland Security, the Department of Defense, and the Justice Department funded the initial research for “rapid DNA” technology, and after just a year on the market, the $250,000 RapidHIT is already being used in a few states, as well as China, Russia, Australia, and countries in Africa and Europe.

“We’re not always aware of how it’s being used,” Schueren said. “All we can say is that it’s used to give an accurate identification of an individual.” Civil liberties advocates worry that rapid DNA will spur new efforts by the FBI and police to collect ordinary citizens’ genetic code.

The US government will soon test the machine in refugee camps in Turkey and possibly Thailand on families seeking asylum in the United States, according to Chris Miles, manager of the Department of Homeland Security’s biometrics program. “We have all these families that claim they are related, but we don’t have any way to verify that,” he says. Miles says that rapid DNA testing will be voluntary, though refusing a test could cause an asylum application to be rejected.

“We’re not always aware of how it’s being used. All we can say is that it’s used to give an accurate identification of an individual.”

Miles also says that federal immigration officials are interested in using rapid DNA to curb trafficking by ensuring that children entering the country are related to the adults with them. Jeff Heimburger, the vice president of marketing at IntegenX, says the government has also inquired about using rapid DNA to screen green-card applicants. (An Immigration and Customs Enforcement spokesman said he was not aware that the agency was pursuing the technology.)

Meanwhile, police have started using rapid DNA in Arizona, Florida, and South Carolina. In August, sheriffs in Columbia, South Carolina, used a RapidHIT to nab an attempted murder suspect. The machine’s speed provides a major “investigative lead,” said Vince Figarelli, superintendent of the Arizona Department of Public Safety crime lab, which is using a RapidHIT to compare DNA evidence from property crimes against the state’s database of 300,000 samples. Heimburger notes that the system can also prevent false arrests and wrongful convictions: “There is great value in finding out that somebody is not a suspect.”

But the technology is not a silver bullet for DNA evidence. The IntegenX executives brought up rape kits so often that it sounded like their product could make a serious dent in the backlog of half a million untested kits. Yet when I pressed Schueren on this, he conceded that the RapidHIT is not actually capable of processing rape kits since it can’t discern individual DNA in commingled bodily fluids.

Despite the new technology’s crime-solving potential, privacy advocates are wary of its spread. If rapid-DNA machines can be used in a refugee camp, “they can certainly be used in the back of a squad car,” says Jennifer Lynch, a senior staff attorney at the Electronic Frontier Foundation. “I could see that happening in the future as the prices of these machines go down.”

Democratic members of Congress have urged the FBI to look into the “broad deployment” of rapid DNA in police stations.

Lynch is particularly concerned that law enforcement agencies will use the devices to scoop up and store ever more DNA profiles. Every state already has a forensic DNA database, and while these systems were initially set up to track convicted violent offenders, their collection thresholds have steadily broadened. Today, at least 28 include data from anyone arrested for certain felonies, even if they are not convicted; some store the DNA of people who have committed misdemeanors as well. The FBI’s National DNA Index System has more than 11 million profiles of offenders plus 2 million people who have been arrested but not necessarily convicted of a crime.

For its part, Homeland Security will not hang onto refugees’ DNA records, insists Miles. (“They aren’t criminals,” he pointed out.) However, undocumented immigrants in custody may be required to provide DNA samples, which are put in the FBI’s database. DHS documents obtained by the Electronic Frontier Foundation say there may even be a legal case for “mandating collection of DNA” from anyone granted legal status under a future immigration amnesty. (The documents also state that intelligence agencies and the military are interested in using rapid DNA to identify sex, race, and other factors the machines currently do not reveal.)

The FBI is the only federal agency allowed to keep a national DNA database. Currently, police must use a lab to upload genetic profiles to it. But that could change. The FBI’s website says it is eager to see rapid DNA in wide use and that it supports the “legislative changes necessary” to make that happen. IntegenX’s Heimburger says the FBI is almost finished working with members of Congress on a bill that would give “tens of thousands” of police stations rapid-DNA machines that could search the FBI’s system and add arrestees’ profiles to it. (The RapitHIT is already designed to do this.) IntegenX has spent $70,000 lobbying the FBI, DHS, and Congress over the last two years.

The FBI declined to comment, and Heimburger wouldn’t say which lawmakers might sponsor the bill. But some have already given rapid DNA their blessing. Rep. Eric Swalwell, a former prosecutor who represents the district where IntegenX is based, says he’d like to see the technology “put to use quickly to help law enforcement”—while protecting civil liberties. In March, he and seven other Democratic members of Congress, including progressive stalwart Rep. Barbara Lee of California, urged the FBI to assess rapid DNA’s “viability for broad deployment” in police departments across the country.