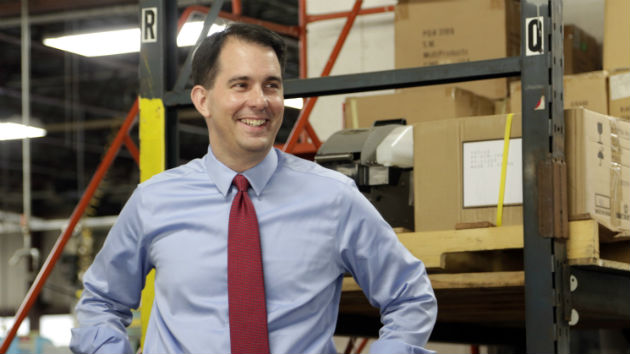 He won his 2010 gubernatorial race. He beat back a recall attempt in 2012. And on Tuesday, he won his third election in four years, easing past what was supposed to be his stiffest competition yet, this time from Democrat Mary Burke.

Before Tuesday’s election, conservatives and establishment Republicans revered Walker for squaring off against organized labor and pushing an unabashedly right-wing agenda in a light-blue, Upper Midwestern state. Before Tuesday’s election, he featured prominently on Republican presidential shortlists. Now, the Walker-for-President murmurings increase to a loud chatter.

Walker could mount a formidable presidential run. He enjoys the backing of both Karl Rove and the Koch brothers. He potentially puts in play a state that has voted for Democrats in the last six presidential elections. Robert Draper captured Walker’s particular appeal in an October profile in GQ:

After eight years of Obama Otherness (preceded by eight years of dubious big-government conservatism), after shape-shifting McCains and Romneys, and amid a crest of nationwide disgust with ineffectual governance, an unassuming midwestern budget-cutting workhorse might well be the answer to a foundering GOP rather than a show pony like Marco Rubio or Ted Cruz, who are long on oratory but short on results. Given that he is currently running for reelection, it serves the governor to feign disinterest in higher office. Still, his friend and political adviser of over two decades, John Hiller, says, “Of course he’s going to look at it. Why wouldn’t he?”

In an off-year election, Mary Burke, Walker’s opponent, had to mount a Herculean effort to mobilize the Democratic voters who turn out in presidential years but not for midterm elections. Burke’s campaign needed turnout to exceed the 2012 recall’s 2.5 million and get closer to the 3 million votes cast in that year’s presidential race. Burke’s economy-centric message homed in on Walker’s failure to fulfill his first-term pledge to create 250,000 private-sector jobs, and she campaigned as a business-savvy technocrat who could jumpstart Wisconsin’s lagging economy. In a state polarized by Walker’s policies, Burke tailored her message to appeal to the small sliver of voters who remained undecided about which candidate to support.

Her outreach wasn’t enough. If Tuesday’s results are any indication, voters—at least the slim majority that gave Walker a second term—think their governor is on the right track and deserves another four years to continue his work.

But don’t count on Walker serving his entire second term. He wouldn’t commit to it when asked by the Green Bay Press Gazette: “I’ve never made a time commitment anywhere I’ve been in office. I’ve always made promises about what I would do and how I would do it. I’m not going to change now.”

On Wednesday, Walker for President begins.