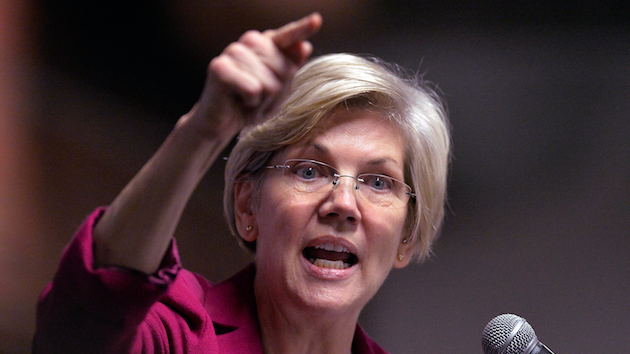 Last week, Congress did Wall Street a solid. When lawmakers passed a giant spending bill that funds the government through September, they included a provision written by Citigroup lobbyists that allows banks to make more risky trades with taxpayer-insured money. Then, on Thursday, bankers got another giveaway: The Federal Reserve announced it would delay for up to two years implementation of a crucial section of the Volcker rule—one of the most important regulations to come out of the 2010 Dodd-Frank financial reform bill. The rule generally forbids the high-risk trading by commercial banks that helped cause the financial crisis. The move by the Fed pushes the deadline for banks to comply past the next presidential election and gives Wall Street lobbyists more time to weaken it.

“Less than a week after Wall Street slipped a bailout provision written by Citigroup into the government spending bill, the Fed has given the big banks another victory,” Sen. Elizabeth Warren (D-Mass.) said in a statement Friday.

“It’s really hard to see an excuse for this,” says Marcus Stanley, the financial policy director at Americans for Financial Reform, an advocacy group.

The Volcker rule ensures that financial institutions don’t engage in something called proprietary trading, which is when a bank trades for its own benefit as opposed to for the benefit of its customers. Banks were supposed to comply with the Volcker rule by July 21, 2014. Last year, when banking watchdogs finalized the rule, the Fed granted banks a year-long extension. The Fed’s Thursday announcement gives banks another year to get rid of certain investments—including those in private equity firms and hedge funds. The central bank also noted Thursday that it plans to push out the deadline again next year, by another 12 months. That brings the new compliance deadline to July 2017, far past the 2016 election. If the new president is a Republican, he could fill his administration with Wall Street insiders opposed to the rule, making it even easier for lobbyists to gut it.

Before the Volcker rule was finalized last year, the financial industry fought like mad to weaken it. The regulation could slash the total annual profits of the eight largest US banks by up to $10 billion, according to an estimate by Standard & Poor’s. Banking reform advocates were fairly happy with way the final reg turned out. But now the financial industry has extra time to take a few more whacks at rule before banks actually have to obey it. “Wall Street’s loophole lawyers and other hired guns will… continue to hit at the rule as if it were a piñata,” Dennis Kelleher, the president of the financial reform advocacy group Better Markets, said when regulators completed the rule in 2013.

The Dodd-Frank law already contains a provision allowing banks that will have difficulty getting rid of particular investments before the initial compliance deadline to request an extension from banking regulators. The Fed’s announcement yesterday amounts to an unnecessary “blanket” extension, Stanley says. “It’s hogwash.”