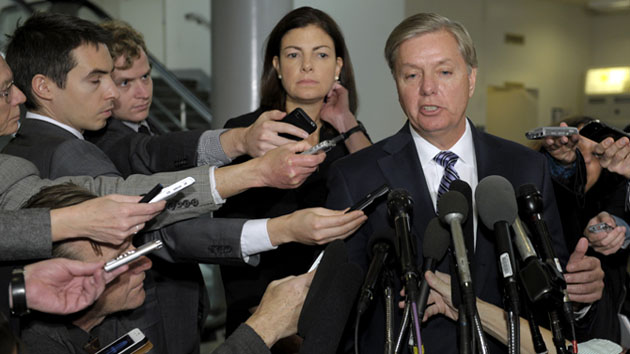 If Sens. Lindsey Graham and Kelly Ayotte have a moment after the next Benghazi press conference, you should ask them about global warming.Susan Walsh/AP

On Wednesday, I wrote about a new Media Matters for America study that shines a light on a big problem with how TV news shows cover climate change. Scientists overwhelmingly agree that humans are warming the planet, but Media Matters found that the highly influential Sunday morning talk shows often feature misleading talking points from global warming skeptics. Frequently, these segments turn into bizarre debates between those who accept science and those who reject it.

On NBC’s Meet the Press, for example, almost two-thirds of the climate coverage last year included “false balance,” according to Media Matters. Fox News Sunday and ABC’s This Week had similar problems: 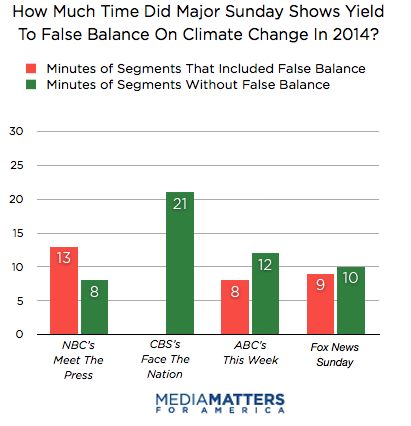 The Media Matters study drew the attention of Sen. Brian Schatz (D-Hawaii). In a press release, he slammed the news networks for misleading viewers “by framing the facts of climate change as a ‘debate.'” He urged them “to stop creating a false debate about the reality of climate change and engage in the real debate about how we can solve it.”

This presents something of a dilemma for the Sunday shows. Interviewing elected officials from both sides of the aisle is a big part of the reason these programs exist in the first place; they can’t host a debate about climate policy and invite only Democrats. At the same time, however, global warming denial is so ingrained on the right that it’s becoming increasingly difficult to find Republicans who can talk about the issue without misinforming viewers. The Media Matters report cites a couple examples of this: Rep. Marsha Blackburn (R-Tenn.) saying on Meet the Press that there’s no scientific consensus on climate change, and North Carolina Gov. Pat McCrory (R) saying on This Week that “the big debate is how much of it is manmade and how much it will just naturally happen as Earth evolves.”

Fortunately—thanks to Schatz—TV bookers now have a handy list of GOP senators who acknowledge the scientific facts surrounding climate change and who, presumably, can participate in an intelligent discussion of what should actually be done about the problem. Last week, Schatz introduced legislation declaring it the “sense of Congress” that climate change is real and that human activity contributes significantly to it. Five Republicans voted in favor of Schatz’s amendment: Lamar Alexander (Tenn.), Kelly Ayotte (N.H.), Susan Collins (Maine), Lindsey Graham (S.C.), and Mark Kirk (Ill.). The other 49 voted no.

There’s plenty of room for disagreement on policy matters, of course. Alexander and Graham, for example, have called on the Obama administration to withdraw its proposed greenhouse gas emissions rules, the centerpiece of the president’s climate plan. But if the networks are looking for Republicans who can speak accurately about the science, at least now they know where to find them.

(Disclosure: I used to work at Media Matters.)