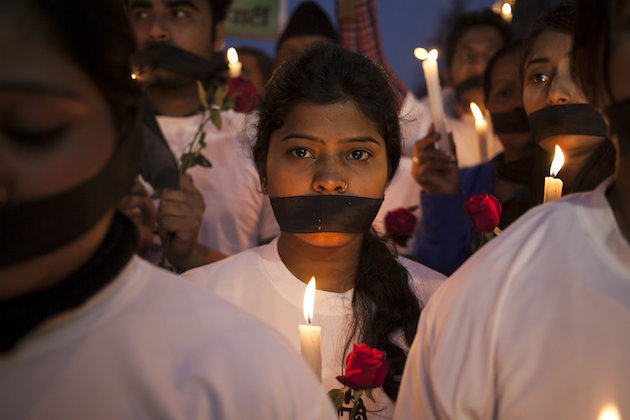 In New Delhi, women participate in a candlelight vigil at the bus stop where, two years ago, a woman boarded the bus where she was gang-raped. Tuesday, Dec. 16, 2014.AP/Tsering Topgyal

Citing fears its broadcast would lead to “public outcry,” an Indian court issued an order yesterday blocking the country’s media from airing a documentary centering on the 2012 gang-rape and murder of a 23-year-old woman that occurred on a New Delhi bus.

The BBC documentary, titled India’s Daughter, features an interview with one of the six men accused of the crime, in which he repeatedly blames the victim for fighting back while she was raped. Mukesh Singh spoke to British filmmaker Leslee Udwin from prison, where Udwin says he appeared like “a robot” during the 16 hours the interview was conducted.

“You can’t clap with one hand,” Singh says in the film. “It takes two hands. A decent girl won’t roam around at 9 o’clock at night. A girl is far more responsible for rape than a boy. Boy and girl are not equal. Housework and housekeeping is for girls, not roaming in discos and bars at night doing wrong things, wearing wrong clothes. About 20 percent of girls are good.”

Rajan Bhagat, a spokesperson for the New Delhi police, told AFP that police officials were concerned the “very objectionable interview” could incite violence.

“A girl is far more responsible for rape than a boy. Boy and girl are not equal,” Singh says in the film.

“We have only seen the promotional parts of the film. Based on that we took the matter to court because we felt that it will cause likely apprehension of public disorder,” Bhagat said.

The brutal 2012 incident shocked the international community and prompted mass demonstrations in India. Over weeks of protests, advocates called for reform and increased protections for women in a country where sexual assault is perceived as a source of shame and often leads to more restrictions for women.

But the controversy over India’s Daughter demonstrates the country remains divided over the issue of sexual assault and how to move forward. India’s parliamentary affairs minister M. Venkaiah Naidu slammed the documentary as an “international conspiracy to defame India.” In its Tuesday order, the court echoed these concerns and said the film violated Indian law preventing “intent to cause alarm in the public.”

Udwin has asked the Indian prime minister to lift the ban. The film premieres on BBC Wednesday evening.