Today the federal government officially launched analytics.usa.gov, a website that shows online traffic to nearly 300 official sites (out of 1,350 executive branch domains). Think of it as Google Analytics or Chartbeat for civics nerds.

Given that Tax Day is right around the corner, the Internal Revenue Service’s “Where’s My Refund?” page predictably lands at the top of the list of sites with the most current visitors. Next is the National Weather Service’s forecast by region page.

But one entry on the top 10 list doesn’t fit in with Americans’ interest in taxes and weather: A petition calling for the removal of Puerto Rico Gov. Alejandro García Padilla that’s posted on the White House’s We the People site. Its appearance on the list is a testament both to its popularity and just how few people hang out on federal websites. 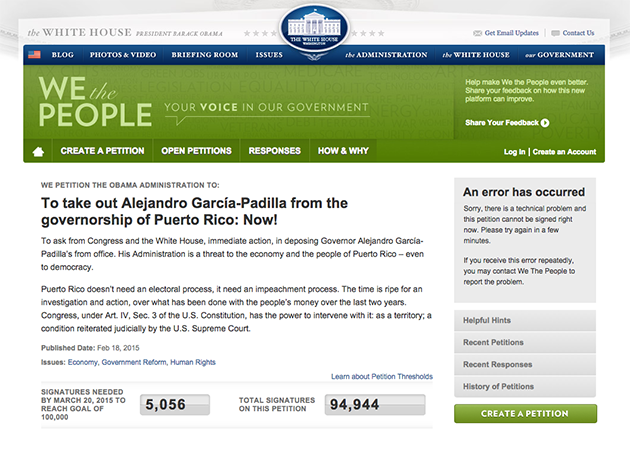 As of midday Thursday, the petition had about 95,000 signatures, short of the 100,000 mark that would compel the White House to formally respond. Most of the rancor toward García Padilla stems from the island’s current economic crisis and the governor’s recent proposal to implement a 16 percent value-added tax to help pay down billions of the commonwealth’s debt.

Whether the Obama Administration could actually remove García Padilla is a complicated question. As a commonwealth, the island and its 4 million residents (most of whom are US citizens) has its own constitution, which includes a provision for impeachment. But the federal government could also theoretically remove the governor under a provision in the US Constitution that says that Congress has the power to “dispose of” laws in US territories.

It’s not clear what percentage of the visitors to the anti-García Padilla petition page live in Puerto Rico.