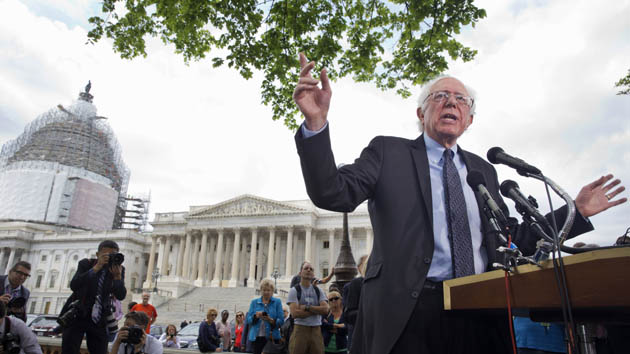 Unlike Hillary Clinton, his rival for the Democratic presidential nomination, Bernie Sanders didn’t use a splashy, big-budget video to announce his campaign. Instead, the Vermont senator opted for a series of one-on-one television interviews Wednesday followed by a low-key launch event outside the US Capitol Thursday morning. “I believe that in a democracy, what elections are about are serious debates over serious issues,” he said Thursday. “Not political gossip, not making campaigns into soap operas. This is not the Red Sox vs. the Yankees. This is the debate over major issues facing the American people.”

Pundits are already dismissing Sanders—who has, in the past, described himself as a socialist rather than a Democrat—as a long-shot candidate with little chance of defeating Clinton for the Democrats’ 2016 nomination. But Sanders is already beating Clinton on one metric: answering questions from the press.

Earlier this week, National Journal‘s Zach Cohen counted all of the times Clinton has answered press questions since she announced her presidential campaign on April 12. Cohen counted just seven “answers”—about half of which ignored the actual question. When asked about whether a super-PAC would support her campaign, she said, “I don’t know.” When she was quizzed about her chances in Iowa, she said “I’m having a great time, can’t look forward any more than I am.”

Sanders, who needs all the press attention he can get, kicked off his presidential campaign by fielding a barrage of questions from TV news reporters in interviews Wednesday. Over the course of one five-minute exchange with MSNBC’s Andrea Mitchell on Wednesday, Sanders answered seven separate questions. The trend continued at Sanders’ campaign launch event Thursday morning, when he took six more questions.