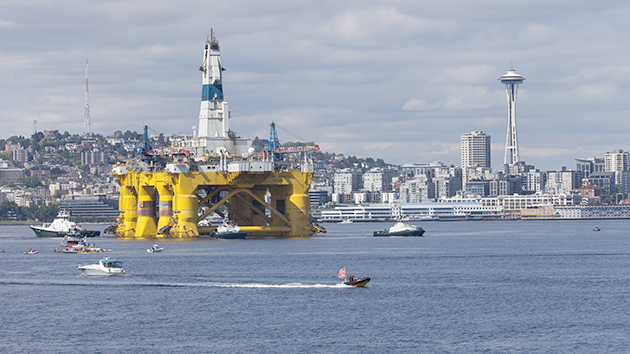 Oil companies are pretty much the last ally you’d think of when it comes to advancing big-picture solutions to climate change. These are the companies, after all, whose product is responsible for causing a significant amount of climate change in the first place—and pretty much every proposed fix for global warming necessarily involves burning less oil.

So it came as a bit of a surprise Monday when six of the leading European oil companies, including BP and Shell, unveiled a letter addressed to the United Nations climate chief calling for a price on carbon emissions (read the full letter below).

“We believe that a price on carbon should be a key element” of ongoing UN-led international climate negotiations, the letter said. This week representatives from nearly 200 countries are meeting in Bonn, Germany, to prepare for a summit in Paris this winter where they hope to produce a powerful global accord on fighting climate change. The letter called on the world’s governments to create new national carbon markets where they don’t currently exist (like most of the United States, for example), and to eventually link those markets internationally.

“We believe that a price on carbon should be a key element” of global climate talks, a letter from several European oil companies said.

As Bloomberg Business pointed out, the letter is “unprecedented,” in that it’s the first time a group of major oil companies have banded together to advocate for a serious climate change policy. It was welcomed by the UN’s top climate official, Christiana Figueres, who said that the “oil and gas industry must be a major part of the solution to climate change.”

Most environmental economists and policy wonks agree that making companies pay for their carbon pollution—whether through a tax or a cap-and-trade system—is a fundamental step for any meaningful reduction in greenhouse gas emissions. The basic idea is that making carbon pollution expensive will drive big polluters to clean up. Policies like this are already gathering steam across the globe, from Canada to China. (California and a few Northeast states have regional carbon markets, but a national carbon price is still a non-starter in the US Congress.) Recently, Australia demonstrated just how effective carbon pricing can be, in a counterintuitive way: Carbon emissions dropped immediately after the country implemented a carbon tax, then jumped right back up when the tax was repealed.

If Monday’s letter is any clue, oil companies are reading the writing on the wall, and they know that one way or another, it’s time to start planning for a future when carbon pollution is more expensive and tightly regulated. Well, some oil companies: Conspicuously absent from the letter are any US oil companies, like Chevron or ExxonMobil; all the signatories are European. In fact, just last week Exxon chief Rex Tillerson implicitly blasted his European peers for cozying up to the UN on climate issues, saying his company wouldn’t “fake it” on climate change and that investing in renewable energy is tantamount to “losing money on purpose.”

The head of French oil giant Total addressed the cross-Atlantic schism in comments to Reuters, saying that the European companies were set on throwing their weight behind carbon pricing “without necessarily waiting for an American to come on board.”

Although carbon pricing “obviously adds a cost to our production and our products,” the letter says, the companies would prefer consistency and predictability over the patchwork of policies that exists now. In other words, it’s easier to justify and plan investments in lower-carbon projects, such as replacing coal with natural gas, when carbon prices are stable and “even-handed,” the letter said. At the same time, these companies have come under increasing pressure from shareholders to address how they’ll stay profitable in the future, as restrictions on carbon emissions are tightened.

To that end, a few of the signatories already have their own internal “shadow” carbon price, where investment options are calculated with a hypothetical carbon price added in, as a way of anticipating future policies.

Still, progressive-sounding statements notwithstanding, oil companies are oil companies, and the letter gives no indication that any of them have plans to replace fossil fuels as their primary product. Shell, for one, is just weeks away from a new foray into offshore drilling in the Arctic. And according to Bloomberg, the European companies are no better than their American counterparts in terms of their actual carbon footprint. So it remains to be seen how committed the companies will be to supporting sweeping changes to the global energy system, or if letters like this are just a clever way to stay relevant as the international climate talks forge ahead. Either way, the paradox of a corporation calling for a carbon price while still pursuing fossil fuel extraction is just more evidence that the free market won’t fix climate change voluntarily—governments have to create new policies, like an international carbon price, that energy companies can’t evade.