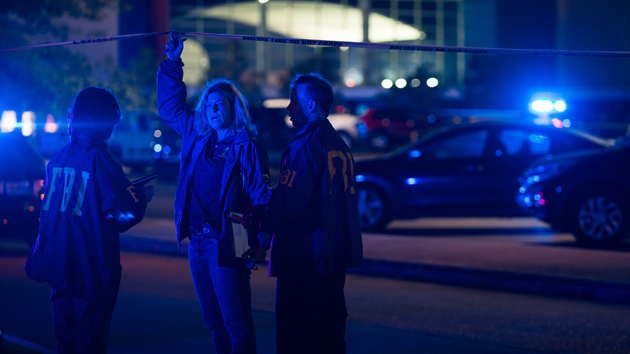 Federal investigators respond to the scene of a shooting at the Grand Theatre on Thursday in Lafayette, Louisiana.Denny Culbert/AP

A Louisiana cinema showing Amy Schumer’s new movie, Trainwreck, was the scene of a deadly shooting spree Thursday evening that left three dead, including the shooter, and at least seven injured, after an assailant opened fire on an audience of around 100 people before turning the handgun on himself.

Phone calls were placed to 911 from within Grand Theater 16 in Lafayette around 7:30 p.m., and 12 ambulances were dispatched to the scene. Victims were taken to three nearby hospitals with injuries that ranged from non-life-threatening to critical.

The seven injured range in age from late teens to “probably into the 60s,” said Lafayette Police Chief Jim Craft during a press conference. One victim has been released; another is in surgery and is “not doing well,” he said.

While investigators have not yet released the identity of the shooter, officials on the scene told CNN that he was a 59-year old white male with a criminal record.

Although Grand Theater has a corporate policy against firearms in their cinemas, Louisiana state carry law only prohibits firearms in schools, places of worship, government buildings, or parades and demonstrations.

Louisiana Gov. Bobby Jindal, a prospective GOP presidential nominee, was in Baton Rouge at the time of the shooting, and he arrived in Lafayette about an hour later. In a news conference, he expressed his condolences for the victims’ families. “As governor, as a father, and as a husband, whenever we see these or hear about these senseless acts of violence it make us both furious and sad at the same time,” he said.

But when the topic of gun control came up, Jindal responded, “Let’s focus on the victims right now. Tonight’s not the night.”

In an interview with the BBC on Thursday, President Obama said that his failure to pass “common-sense gun laws” has been the greatest frustration of his presidency. “If you ask me where has been the one area that I feel that I’ve been most frustrated and most stymied, it is the fact that the United States is the one advanced nation on Earth in which we do not have sufficient, common-sense gun safety laws,” he said.