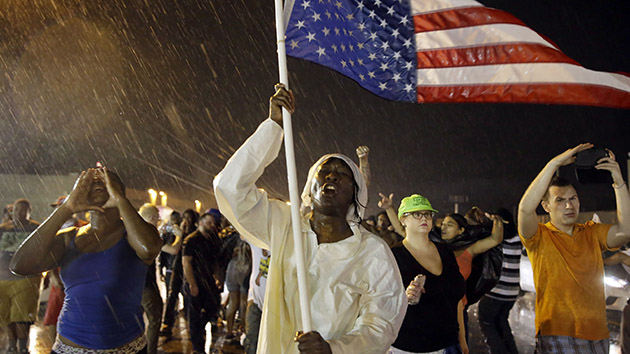 A day after the city of Ferguson marked the first anniversary of the fatal police shooting that killed unarmed black teenager Michael Brown, nonviolent demonstrators, including activist and philosopher Cornel West and Black Lives Matter organizer Johnetta Elzie, were arrested in St. Louis. Demonstrators were seen jumping over police barricades outside a federal courthouse during a planned sit-in protest demanding the suspension of the Ferguson police department.

Arrests underway at the peaceful protest outside the St. Louis federal courthouse. pic.twitter.com/zMVLSdJwpc

Cop arresting @CornelWest smiling and taking pictures as a fellow cop poses for a photo with West in handcuffs. #moralmonday

Cornel West just got arrested together with around 40 other activists BlackLivesMatter pic.twitter.com/lkMwHkgEZE

According to MSNBC, demonstrators joined the #MoralMonday sit-in expecting to be arrested. Shortly before getting apprehended, Elzie tweeted a reference to the arrest of Sandra Bland, who died in police custody last month:

If I’m arrested today please know I’m not suicidal. I have plenty to live for. I did not resist, I’m just black.

The arrests come just hours after St. Louis County issued a state of emergency in light of the violence that erupted late Sunday night after a police officer shot a man they say opened fire at them. Police charged 18-year-old Tyrone Harris with four counts of assault on law enforcement and other crimes. He remains in critical condition.