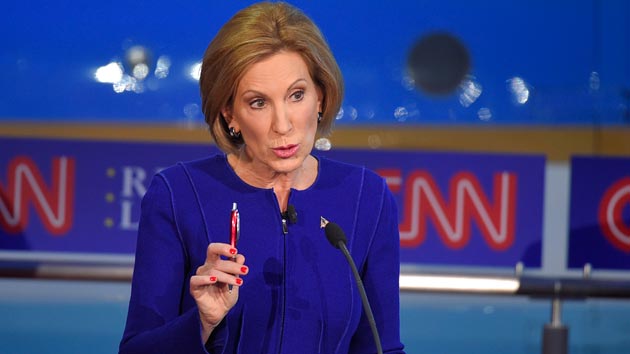 During last week’s Republican presidential debate, former Hewlett-Packard CEO Carly Fiorina described the doctored Planned Parenthood sting videos that have spurred the ongoing effort by congressional Republicans to defund the women’s health care provider. Her voice rising, she recounted a grisly scene: “I dare Hillary Clinton, Barack Obama, to watch these tapes. Watch a fully formed fetus on the table, its heart beating, its legs kicking, while someone says we have to keep it alive to harvest its brain.”

The audience erupted in applause. Fox News called it “the moment of the night.” The only problem? None of what she described ever happened in the heavily edited videos. (Though this week, Fiorina’s super-PAC created its own version of the previously nonexistent video.) She went on to make many more inaccurate assertions during the debate. But her delivery was confident and eloquent: Fiorina won, and in the last week she has surged in the polls. In a recent CNN poll, she’s second in the GOP presidential field, inching up behind Donald Trump.

As it turns out, Fiorina’s tendency to embellish—or altogether avoid—the facts goes back much farther than last week’s debate. Below is a partial compilation of some of her less-than-truthful moments:

1. Claim: Fiorina was not fired from her job at Hewlett-Packard because of performance.

Facts: In February 2005, Fiorina was dismissed from her post as CEO of HP by a board of directors that she’s since called “dysfunctional.” At the time, she roundly told reporters that the firing was not about performance. She struck a similar note in her 2006 memoir, Tough Choices, writing that after more than five years leading HP, by December 2004 she had pulled the company toward success. She cited a strong fourth quarter, despite a third-quarter “stumble.” In fact, the stumble was an enormous shortfall: HP missed its earnings projections that quarter by 23 percent. “When companies miss by a few pennies, it doesn’t mean all that much,” the New York Times wrote of Fiorina in 2006. “When companies miss by 23 percent, Wall Street starts wondering if the people at the top have a clue as to what’s going on in the various businesses.” The Times also pointed out at the time that although Fiorina wrote in her memoir that HP missed its numbers on her watch only three times, “in fact, the company fell short at least nine times on either revenue, profit or both.”

2. Claim: The Securities and Exchange Commission investigated allegations of HP’s violations of the Iran embargo and cleared HP management of any knowledge of the problem.

Facts: Last week, several news outlets reported that Fiorina was CEO of HP when the company allegedly sold products to Iran via a third-party company in Dubai, potentially in violation of US-Iran sanctions. When conservative radio host Sean Hannity questioned Fiorina about the allegations last Friday, she said, “The SEC did a thorough investigation and concluded that no one in management, myself included, knew anything about it.”

In fact, there’s no evidence that an SEC investigation of the allegations ever happened. The SEC did inquire about the company’s Iran dealings in a 2009 letter, after Fiorina had left the company. But there’s no evidence that a ruling clearing management of any knowledge was ever issued. What’s more, in their response letter to the SEC, HP indicated that management was aware of the Dubai-based company Redington Gulf’s sales of HP products to Iran, but that such sales were legal under US law.

Facts: Redington Gulf was open about its sales of HP products to Iran. The company issued a press release in 2003 saying that its relationship with HP began in 1997 to focus on “one market—Iran.”

4. Claim: Buying a semi-automatic weapon in the United States is illegal.

Facts: In 2010, Fiorina ran for the Senate in California against three-term incumbent Sen. Barbara Boxer. During their first debate, the moderator asked Fiorina why she opposed reinstatement of the federal ban on assault weapons. She responded with several inaccurate points: “First of all, you know, assault weapons and semi-automatic weapons are not the same thing,” Fiorina said. “It’s a definitional issue. There are—but here’s the important point: It’s illegal today to be buying semi-automatic weapons.”

Facts: During her 2010 Senate debate against California incumbent Sen. Barbara Boxer, the moderator asked Fiorina about her views on abortion. “I understand that this is an emotional issue for many women,” she responded. “I happen to be pro-life. Barbara Boxer holds a very extreme view: that taxpayers should pay for virtually any abortion, any time, anywhere, for any reason.” In fact, the Hyde Amendment, which Boxer supported as a “good compromise,” prohibits using federal dollars to fund most abortions, unless the pregnancy arises from rape, incest, or the abortion is needed to save the life of the mother.

6. Claim: Fiorina’s second husband picked her out of “the secretarial pool.”

Facts: During a town hall in New Hampshire over Labor Day weekend, Fiorina described meeting Frank Fiorina. “It was a long time ago in the technology world and there weren’t that many people actually who took a young woman from the secretarial pool all that seriously. And he did—so I had to fall in love and marry him.” But as the Washington Post points out, Fiorina was not a secretary when they met. She was working in government communications at AT&T. Her future husband was in a higher position and took interest in one of her ideas.

7. Claim: Thanks to Fiorina’s leadership, HP became the world’s first $100 billion IT company.

Facts: Fiorina’s 2010 Senate campaign website trumpeted her achievements as HP’s CEO, saying that she “positioned HP to become the first $100 billion information technology company.” HP did become the first IT company to reach $100 billion in sales, but not until 2007—several years after Fiorina’s departure and during the tenure of CEO Mark Hurd. Fiorina’s presidential campaign says her leadership in the years leading up to this milestone—particularly the Compaq merger she orchestrated—was key to reaching the $100 billion mark. But the merger was widely deemed a failure, rather than a financial boon for the company.

8. Claim: As president, Fiorina would not negotiate with Russian President Vladimir Putin

Facts: During her presidential run, Fiorina has repeatedly said that, as president, she would completely avoid negotiations with Putin. “Russia is a bad actor,” Fiorina said during last week’s primary debate. “Vladimir Putin is someone we should not talk to, because the only way he will stop is to sense strength and resolve on the other side, and we have all of that within our control.” But before being so tough on Putin, Fiorina expressed being very impressed with his leadership in Russia. As the Daily Beast points out, Fiorina met Putin in 2001, at the APEC CEO summit in Beijing. Both of them were slotted to give speeches, and Fiorina—then CEO of HP—spoke immediately before Putin. She talked about how Putin had led Russia through a dramatic transition to democracy. “Hewlett-Packard has been at the center of a lot of change in our 62-year history. But President Putin was elected president in the first democratic transition in Russia in 1,000 years,” Fiorina said. “Talk about giving new meaning to the word ‘invent.'” The Fiorina campaign disagreed with this interpretation, telling the Daily Beast that this was merely “a fairly banal statement of fact.”