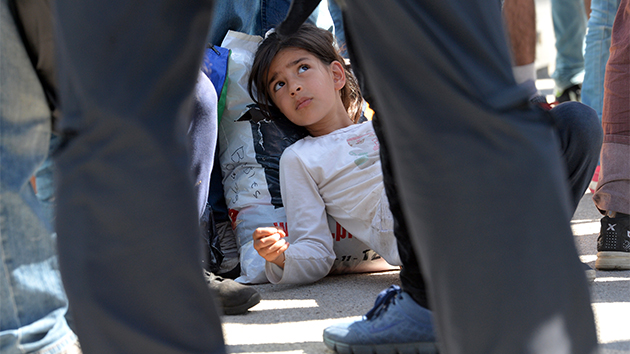 Germany last week was filled with crowds of cheering volunteers who welcomed tens of thousands of refugees into Munich after long and sometimes violent journeys through the Balkans. But this week, there were signs that the mood of the country may already be shifting, with Germany’s right wing poised to take advantage of any discomfort with the presence of refugees.

A poll released on Tuesday by Bild, Germany’s largest tabloid, showed rising support for the right-wing, anti-immigrant party Alternative for Germany, or AfD. Earlier this month, 3 percent of the country backed the party, known for its nativist and anti-European Union stances. Now Support for AfD stands at 5.5 percent, just over the 5 percent threshold to earn seats in the Germany’s Parliament. The poll followed a week during which members of the Christian Social Union, the Bavarian sister party of Chancellor Angela Merkel’s center-right Christian Democratic Union, said publicly that the refugee situation was spiraling out of control.

“The situation in Germany is more tense than it is portrayed in most international commentaries,” Timo Lochocki of the German Marshall Fund, a US-German think tank, told Mother Jones. He pointed out that the government must now do the hard work of integrating refugees, including screening them to make sure their refugee status is valid, providing them with public money and housing, and cajoling state and local governments into welcoming the new arrivals. Above all, Germany has to find a way to slow the influx—and fast.

“The government stepped in and said, ‘This is a major challenge for Germany, however we have the means at our disposal to cope and this is going to be temporary,'” Lochocki said. “If the numbers don’t go down remarkably next year, the German voters will hold the governing Social Democrats (SPD) and the Conservatives (CDU/CSU) accountable for not living up to their announcements.”

That doesn’t mean a right-wing takeover is imminent. Merkel has publicly welcomed refugees to Germany as their numbers surged over the summer, and the German public has largely followed suit. Along with the images of Germans rushing to help out in Munich, polls conducted last week showed strong support among the German public for accepting large numbers of refugees.

And neither Alternative for Germany nor the NPD, Germany’s neo-Nazi party, is particularly powerful. Both have come out against accepting refugees, with AfD proposing tougher controls on immigrants last week and NPD members taking part in controversial anti-immigrant marches in various German cities. Both have higher levels of support in parts of former East Germany, where far-right politics are more popular, but neither party has ever won enough votes to make it into Parliament—though that could change.

That contrasts sharply to much of the rest of Europe, where right-wing parties from France’s National Front to Greece’s Golden Dawn are important players. In liberal Sweden, the refugee crisis has fueled support for the country’s anti-immigrant party, which has gained a huge amount of support, according to a poll taken last month. Hungary, where the xenophobic Jobbik party is the third largest in the legislature, helped fuel the current refugee crisis by building a fence to block refugees and passing tight restrictions on those caught in the country. Denmark, another prominent opponent of taking more refugees, saw the anti-immigrant Danish People’s Party ride the refugee issue to a major victory in elections just three months ago. Germany could find itself in a similar situation if the country’s pro-immigrant mood changes.

One sign of a potential shift came on Sunday. After a summer of welcoming refugees, denouncing nativist violence, and even suspending EU regulations to allow all Syrians to apply for refugee status in Germany, Merkel’s government abruptly closed its border with Austria in an attempt to stem the daily flow of thousands of refugees into southern Germany. The website of Der Spiegel described the border closure as “the end of the summer fairy tale.” The Washington Post also reported on Thursday that the German government may introduce a law that would streamline deportations, cut benefits, and possibly roll back Merkel’s declaration that all Syrian refugees were welcome to apply for asylum in Germany despite EU rules to the contrary.

A solution is still a long way off. By closing its border, Germany also hoped to pressure the European Union into distributing refugees more evenly across Europe. EU members instead have failed to agree on adopting even an optional quota system during meetings this week.

“They haven’t basically planned for this,” Lochocki said of the German government. “They might have already proposed something they can’t deliver on. And then, well, this opens the window of opportunity” for the right wing.

Max J. Rosenthal is reporting from Berlin as part of the Arthur F. Burns Fellowship, a two-month reporting program in Germany run by the International Center for Journalists.