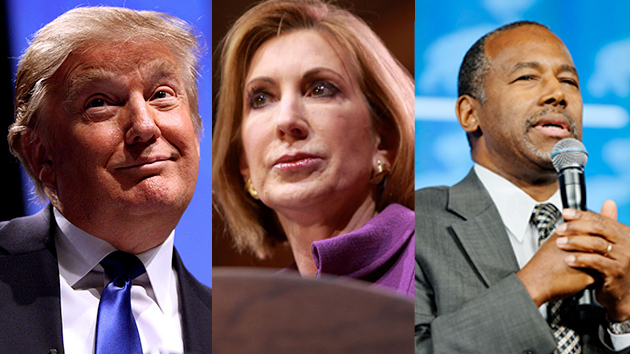 The second Republican primary debate is tonight. It should be fun. It’s supposed to focus on foreign policy, so it could be an excellent opportunity to examine the global implications of climate change. What’s more, three of the show’s biggest stars have been running their mouths about global warming over the last few days.

Guess what? The things they said were dumb and wrong.

First up: The Donald. During a speech in Texas on Monday, Trump took aim at President Barack Obama’s oft-repeated (and true) claim that climate change is a major threat to America’s national security.

Next up, rising star Ben Carson, who has gained more in the polls over the last month than any other candidate and poses the biggest challenge to Trump tonight. Last week, he told the San Francisco Chronicle that “there is no overwhelming science that the things that are going on are man-caused and not naturally caused. Gimme a break.”

Actually, there is a ridiculously overwhelming amount of science that shows just that. And fortunately, California Gov. Jerry Brown (D) was happy to share all that information with Carson:

Finally, there’s Carly Fiorina, the only candidate to be promoted from the “kid’s table” debate in August, to the grown-up table tonight, thanks to some good polling early in the month. In an interview with CNBC’s John Harwood published today, she trotted out the good old standby line that “a single nation acting alone can make no difference at all,” and that therefore the United States needs to stop “destroying peoples’ livelihoods on the alter of ideology.”

I guess she missed the news that the United States, rather than acting alone, has actually been really successful in convincing China and other major polluters to take action.