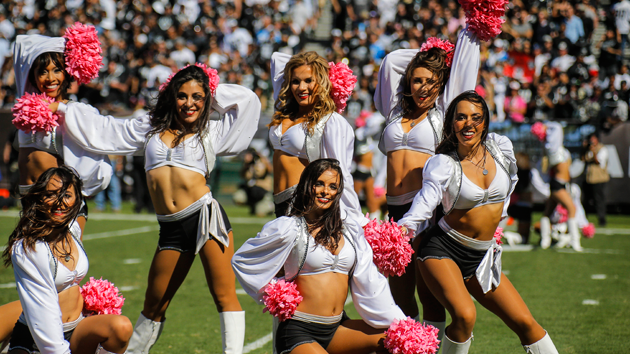 The Oakland Raiderettes in 2014. In July of this year, California passed a law saying pro cheerleaders should be paid at least minimum wage.Thurman James/Cal Sport Media/ZUMA

Before the start of a new football season Thursday, policymakers from across the country are urging NFL Commissioner Roger Goodell to address an old problem: The mistreatment of the women cheering on the sidelines. Nineteen lawmakers from eight states sent a letter to Goodell on Wednesday urging teams to pay cheerleaders minimum wage.

The letter comes after cheerleaders from five NFL teams—the Oakland Raiders, Buffalo Bills, New York Jets, Cincinnatti Bengals, and Tampa Bay Buccaneers—sued their respective teams last year for sub-minimum-wage pay and degrading working conditions (think “jiggle tests” and fines for bringing the wrong pom-poms). Though the allegations in each lawsuit differed slightly, they centered on a core issue: Cheerleaders are currently classified as independent contractors rather than employees, allowing teams to pay meager wages and constantly threaten to cut members from the squad. The lawsuits led California policymakers to pass a law in July classifying cheerleaders for pro teams as employees.

“We shouldn’t have to go state by state to make this happen,” says New York Assemblywoman Nily Rozic, who introduced similar legislation to protect cheerleaders earlier this year. “The NFL should make it a league policy.”

The letter, signed by policymakers from eight states, urges Goodell to classify cheerleaders as employees. Given the similarities in the five lawsuits, it reads, “there is reason to believe that the issue of misclassification and wage theft is not just prevalent among the teams that have been sued.”