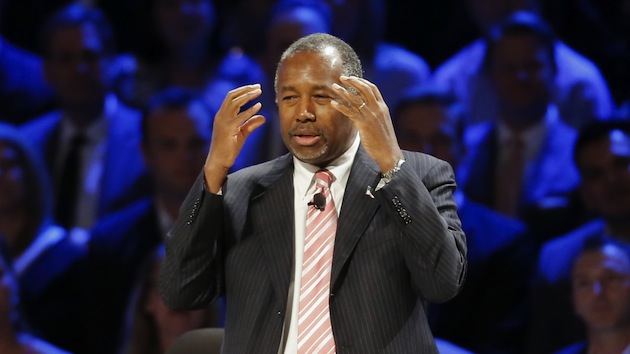 Ben Carson, the retired neurosurgeon and political novice, has leaped to the head of the GOP’s 2016 pack in Iowa. The most recent Des Moines Register poll placed him in the lead with 28 percent, and this surge is undoubtedly fueled by religion. In the survey, he was backed by 33 percent of born-again Republican Christians, a hefty voting bloc in the first-caucus state. (In a Monmouth University poll this summer, he was the first choice of 29 percent of Iowa evangelicals.) Moreover, a whopping 89 percent of the Republicans in the Register poll said they found Carson an attractive candidate because he has vowed his actions will be guided by his faith in God.

Religion and politics can make a volatile mix. In the case of Carson, this overlap is an essential part of his success. Yet it is odd that Carson has done so well with evangelicals when he is a high-profile and devoted member of a church that teaches that almost all evangelical Christians will soon join with Satan to oppose Jesus Christ.

Carson is a Seventh-day Adventist who has publicly voiced his commitment to this church and championed its core beliefs, most notably the view that God created the world in six days (literally) and that evolution is bunk (and encouraged by the devil). He has spoken at Seventh-day Adventist events. In a 2013 interview with the church’s official news service, he was asked, “Are there ever any times when you feel it’s best to distinguish yourself from the Seventh-day Adventist Church and what it teaches?” Carson replied, “No, I don’t.”

In this interview, Carson went on to say that he was “proud of the fact that I believe what God has said…that I believe in a literal, six-day creation.”

Carson did not explicitly mention other Seventh-day Adventist tenets. But a central belief of the church is that most other Christian denominations will end up working with the devil. Seventh-day Adventists hold that the Sabbath should be worshipped on Saturday and that religions that observe the Sabbath on Sunday have been corrupted by Satan. The church’s early prophet Ellen White cast much of the blame for this supposed perversion of the Sabbath on the Roman Catholic Church.

White’s prophecies—rendered in the 1800s—are regarded as sacrosanct by the church. She predicted that when Jesus Christ returns to earth, per the Book of Revelation, and triggers the final and cataclysmic clash between God and the Antichrist, a paramount battle will be over the Sabbath. She foresaw the government doing the devil’s bidding by outlawing the Saturday Sabbath, locking up Seventh-day Adventists, and even threatening them with death. And she prophesized that other Christian denominations would hold fast to the Sunday Sabbath and become handmaidens of Satan. Ultimately, Jesus Christ would vanquish Beelzebub, and only Seventh-day Adventists, because they stuck with the Saturday Sabbath, would join him in the kingdom of God. The other Christians? Well, they would be forever condemned.

In a 2014 talk at a Seventh-day Adventist church in Australia, Carson signaled that he believed this is indeed what’s coming. He cited “prophecy”—which is how Seventh-day Adventists routinely refer to White’s predictions—and noted that the “persecution” of the Sabbath was on the horizon.

A few weeks ago, a spokesman for Carson’s presidential campaign insisted to me that it was not fair to interpret those Carson remarks as acceptance of White’s prophecy. But the official position of the Seventh-day Adventists incorporates White’s forecast that other Christian denominations will partner up with Satan. This is church doctrine. In 1997, the general conference of Seventh-day Adventists issued a declaration that is still featured on the church’s website as an “official statement.” It notes:

Seventh-day Adventists are convinced of the validity of our prophetic views, according to which humanity now lives close to the end of time. Adventists believe, on the basis of biblical predictions, that just prior to the second coming of Christ this earth will experience a period of unprecedented turmoil, with the seventh-day Sabbath as a focal point. In that context, we expect that world religions—including the major Christian bodies as key players—will align themselves with the forces in opposition to God and to the Sabbath.

This is a more moderate expression of White’s hellfire-ridden prophecy. But it’s a plain statement: Christians, other than Seventh-day Adventists, are damned and will wind up riding with the devil. And Ted Wilson, the global president of the Seventh-day Adventists, in a 2010 speech citing White, stated that in the coming End Times “anyone worshipping on another day than the seventh-day Sabbath [Saturday] will receive the mark of the beast.”

Is this what Carson believes? In that 2013 interview with the church’s news service, he appeared to endorse enthusiastically the fundamental teachings of the church. (The Carson campaign did not respond to a request for comment.)

Here’s the political question: Do the evangelical voters who are drawn to Carson because of his articulate and forceful professions of his Christian faith realize that he may well consider them future allies of Satan? And if they did, would this matter to them?

Fundamentalist religions tend to cast their way as the only way. That’s the nature of such churches. It is not a huge surprise that Seventh-day Adventists say nonbelievers will be screwed in the End Times. Yet true-believing Seventh-day Adventists take a dim view of other Christian religions and hold what is essentially a dark conspiracy theory: that the government will target them for imprisonment and, possibly, execution.

Journalists and partisans are often reluctant to discuss the religious beliefs of candidates—though that has not been true in the case of President Barack Obama (sincere Christian or secret Muslim?). And days ago, Trump, in typically crude fashion, did question Carson’s religion, saying, “I’m Presbyterian. Boy, that’s down the middle of the road, folks, in all fairness. I mean, Seventh-day Adventist, I don’t know about. I just don’t know about.” Given that Carson is aiming to obtain control of the executive branch of the US government, his views regarding other Christians, the nearness of the End Times, and the Satanic Sabbath persecution conspiracy may well be relevant. (After all, if he shares his church’s belief that the end of time is soon, does he have any reason to care about climate change?) Moreover, evangelical voters flocking to Carson’s campaign might be interested to know whether he does perceive their churches as foot soldiers for the Antichrist.

Carson has yet to speak extensively and specifically about his religious beliefs and how they might shape his approach to governing the United States. Meanwhile, many evangelical voters—who attend church on Sunday—regard Carson as a Christian champion who ought to be placed within the White House. Perhaps they ought to wonder if Carson sees them as the spiritual enemy.