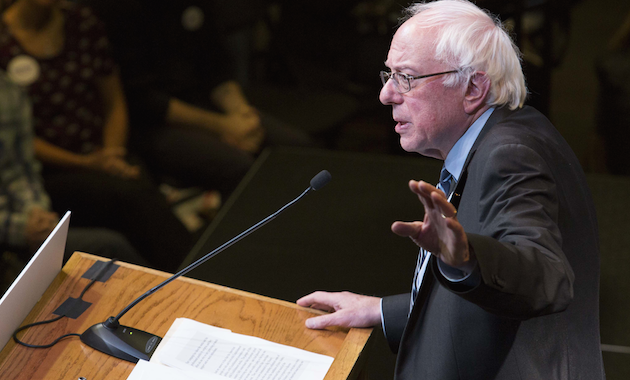 In a fiery speech at Georgetown University outlining and defending democratic socialism on Thursday, Sen. Bernie Sanders, who is seeking the Democratic presidential nomination, went off script from his prepared remarks to condemn Donald Trump and other presidential candidates for their continued use of racist tactics to shape the immigration debate.

“Let me just say a few words from what I’ve heard from several Republican candidates for president over recent months because people can have honest disagreements about immigration, but people should not be using the political process to inject racism into the debate,” Sanders said. He then slammed Trump:

People should not be using the political process to inject racism into the debate. Donald Trump and others who refer to Latinos as peoples from Mexico as criminals and rapists, if they want to open that door, our job is to shut that door. This country has gone too far. Too many people have suffered and too many people have died for us to continue to hear racist words coming from major political leaders.

If Trump, other GOP candidates want to open the door of racism, nativism, “our job is to shut that door.” -Sanders pic.twitter.com/YHWAQi8Emq

The much-anticipated speech concluded with Sanders receiving a rousing, standing ovation from students in attendance.