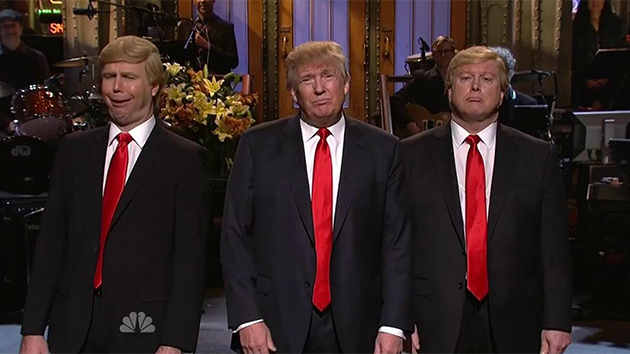 While demonstrators yelled outside NBC’s Manhattan television studios protesting his immigration policies, billionaire mogul and reality TV star Donald Trump became the first presidential front-runner to ever host Saturday Night Live. Starting with a self-aggrandizing and self-mocking monologue while flanked by two SNL Trump imitators, the presidential hopeful then starred in a sketch set in the oval office a year into his first term as president.

“I bought you the check for the wall,” says the visiting President of Mexico. “Consider it an apology for doubting you.” Syria is fixed. There’s a new national anthem, and Ivanka Trump is having the Washington Monument plated with gold. “Wow, that’s going to look so elegant,” says Trump. Watch below:

And of course, there was Trump dancing to the internet thing of the moment, Drake’s “Hot Line Bling”:

Because of course. #SNL https://t.co/jBMU1W7MJm