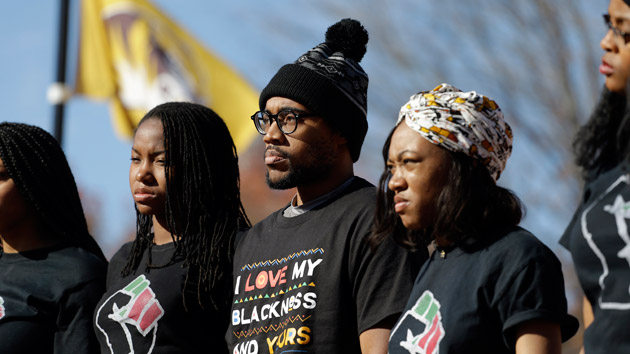 Jonathan Butler, center, stands with supporters at the University of Missouri after ending his hunger strike on Monday.Jeff Roberson/AP

Tim Wolfe, president of the University of Missouri system, resigned from his post on Monday amid growing pressure from students, faculty, and alumni over a series of racial incidents that have plagued the system’s flagship campus in Columbia this fall. Wolfe’s decision to step down came a week after Missouri graduate student Jonathan Butler went on a hunger strike to demand the president’s ouster, after weeks of protests over university inaction. The issue was thrust into the national spotlight on Saturday when a group of black players on the Missouri football team declared they would refuse to participate in football-related activities until Wolfe was removed or stepped down. The players drew support from coaches and the athletic department, though some within the team were unhappy with the protest.

But the matter escalated remarkably fast from Saturday, with Gov. Jay Nixon and US Sen. Claire McCaskill calling for reform, Wolfe resigning, and Chancellor R. Bowen Loftin of the University of Missouri, Columbia, announcing late Monday that he would also resign at the end of the year.

Here’s how the chain of events unfolded since mid September. (For more, check out this timeline from the Maneater, the university’s student newspaper, and one from the Missourian.)

Students flooded onto the university’s Columbia campus following the resignation on Monday, chanting and calling for change. They drew support from those at the university and well beyond, including from congressman and civil rights icon John Lewis, and from Michael Sam, the former Missouri football star who became the first openly gay player drafted by a NFL team.

I am very proud of the students at the University of Missouri. They are following the way of passive resistance and nonviolence.

We are a Family here at the University of Missouri and as a Family we will protect each other. #OneMizzou pic.twitter.com/S1ITuREKSS

As the day went on, members of Concerned Student 1950 linked arms around the encampment on a campus plaza to create a “no media safe space.”

We ask for no media in the parameters so the place where people live, fellowship, & sleep can be protected from twisted insincere narratives

Video shot on the ground shows supporters, including a Greek life administrator and a mass communications professor, blocking a student photographer from taking pictures on public ground and asking him to back up.

On Monday, Butler addressed a large crowd of protesters: “This is not a moment,” he said, “This is a movement.”