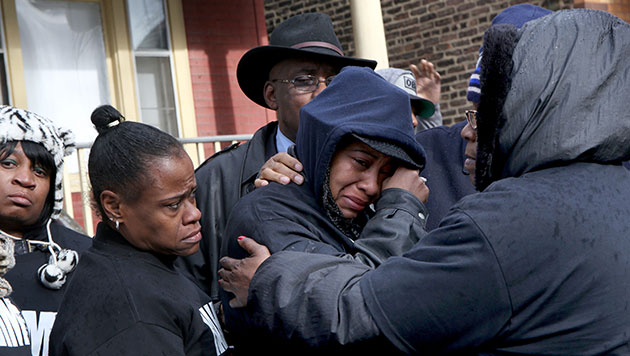 Janet Cooksey, center, the mother of Quintonio Legrier, is comforted by family and friends during a December 27 press conference about the shooting death of her son by the Chicago police.Nancy Stone/TNS via ZUMA Wire

Update (1/1/2016, 10:50 a.m.): Citing an unnamed law enforcement source, the Chicago Tribune has reported more details about what the police officer told investigators about the deaths of Quintonio Legrier and Bettie Jones. The officer said Legrier ran out of the house swinging a bat when the police arrived. The officer was on the porch steps when he fired his gun and did not see Jones in the doorway, the source said. At least seven shell casings were found at the bottom of the porch on the walkway, the source said. An attorney for Jones’ family has said several shell casings were found outside the home near the sidewalk.

Eyewitness accounts from neighbors appear to confirm a Chicago police officer began shooting into the home of Quintonio Legrier and Bettie Jones from several feet away while standing on the sidewalk. That contradicts the police department’s early account, which suggests one of the officers opened fire in the entryway after Legrier confronted him.

Legrier, a 19-year-old engineering student, and Jones, a 55-year-old mother of five and workers’ rights activist, were shot on Saturday when officers responded to a domestic disturbance call at their home around 4:30 a.m. Jones opened the door when police responded to a call from Legrier’s father.

It was the first fatal Chicago police shooting since the city released video footage of another officer shooting 17-year-old Laquan McDonald 16 times in October 2014. The police department’s handling of that case prompted a Department of Justice investigation into the department’s use of force.

The deaths of Jones and Legrier have put more pressure on local and federal officials. The families of both Legrier and Jones have called on Mayor Rahm Emanuel to resign. Emanuel and Illinois Gov. Bruce Rauner have called the shooting “troubling.” Cook County State’s Attorney Anita Alvarez has asked the FBI to assist her investigation of the case. And the Department of Justice plans to include the shooting in its probe of the Chicago Police Department. On Wednesday the mayor, who cut short a family vacation to Cuba after learning about the shooting, announced plans for a “major overhaul” of the police department rules on use of force. The changes include a mandate that all department patrol cars be equipped with a Taser and more be officers be trained to use them by June 1, 2016.

According to the Guardian, Legrier’s and Jones’s deaths bring the total number of fatal police shootings this year to more than 1,120.

Quintonio Legrier’s father says the shooting raises questions about how officers handle suspects who are mentally ill, and his family wonders why the officer involved in this case couldn’t have used other methods, such as a Taser, to handle the situation.

Quintonio was visiting his father, Antonio Legrier, for Christmas in a home where the first- and second-floor apartments share the same entrance. Bettie Jones lived in the downstairs apartment. Antonio, who says his son has recently struggled with “emotional” issues, called the police so they could help him get his son to the hospital. Police say Quintonio had threatened his father with a bat. But Antonio Legrier says Quintonio had merely banged on his bedroom door angrily, and the family’s lawyer says Antonio did not fear his son was going to hurt him.

Here’s what police say happened next: When officers arrived at the house, they were “confronted by a combative subject.” This resulted “in the discharging of the officer’s weapon,” the police department said.

One officer opened fire, killing both Jones and Quintonio.

The police department said Jones was shot “accidentally,” and it issued its “deepest condolences” to Jones’ family.

Although the early police statement about the incident does not specify where the officers were standing, it suggests that Quintonio may have confronted them in the entryway of the building, which prompted the officer to shoot.

However, family members and other witnesses have said the officer was standing on the sidewalk when he began shooting, which could indicate he was not in immediate danger, as the police account may imply.

New details help support the families’ version of what happened.

Janet Cooksey, Legrier’s mother, told me that the front door to Antonio Legrier’s home is old and squeaks when it opens. She said her son’s father told her that he heard gunshots almost as soon as he heard the door open. (Cooksey does not live in the home).

Bullet holes in the door 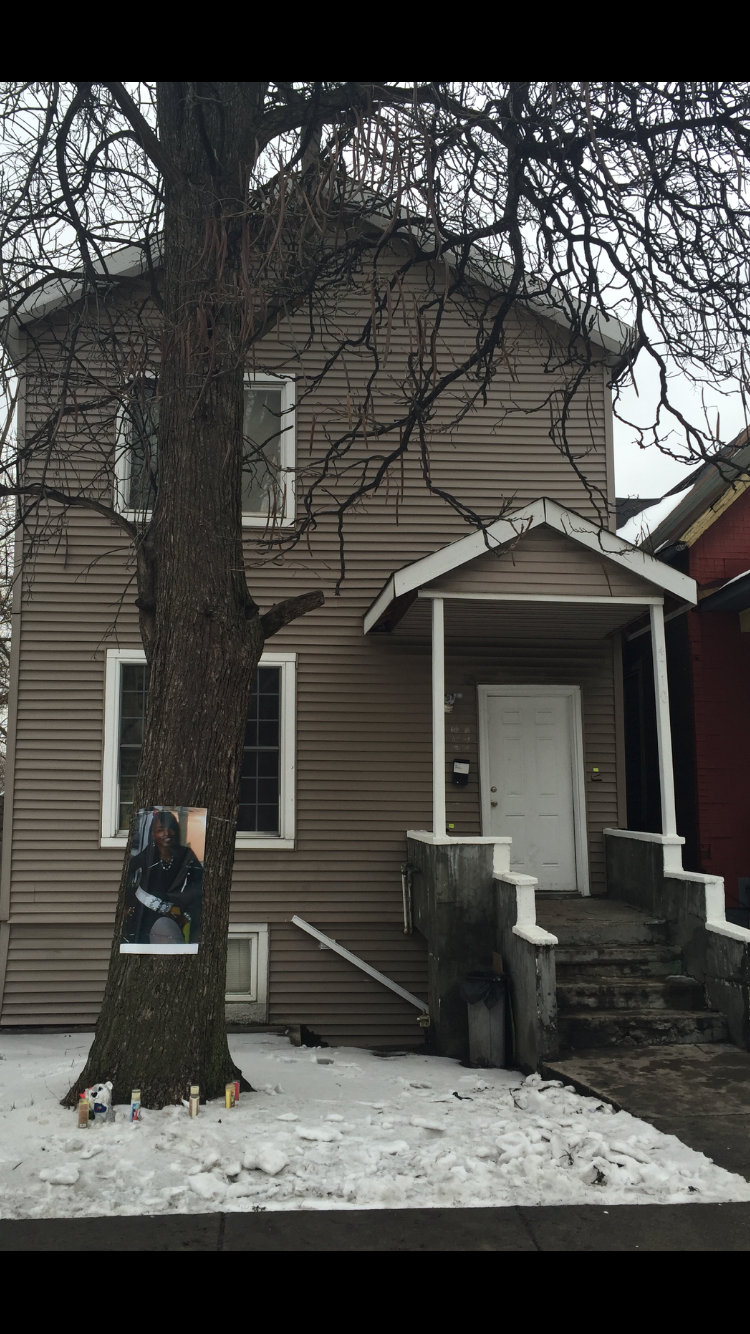 She said Antonio told her that he ran downstairs because he assumed officers were shooting at his son, and that when he got there they started shooting again. She also said there were bullet holes in the door.

Cooksey also said Antonio wasn’t the only person who called police: Quintonio placed a call to them as well, she said.

Quintonio took seven bullet wounds total, Cooksey said, including two in his side and one in his buttocks.

Two neighbors who live next door to Legrier’s house say the officer shot from the sidewalk in front of the home.

Marcos Mercado lives in the house directly to the left of where the shooting occurred. From his living room window, he saw an officer standing on the sidewalk with his gun drawn and then heard gunfire, he told me during an interview at his kitchen table. Marcos did not see the officer pull the trigger, but after shots rang out he saw the officer standing in the same spot still pointing his gun at the house.

Mercado also said he saw another officer with a flashlight “check” in the passageway between Legrier’s home and the house to the right of it.

Mercado said he heard one officer yell for someone to come out of Legrier’s house. When asked how many minutes passed between when the officers arrived and when the shooting began, Mercado said officers began shooting “right away.” He heard shots in rapid succession, he said.

He said he spoke to detectives from the city’s Independent Police Review Authority for 10 minutes the day after the shooting.

I spoke to another neighbor, who lives in the house directly to the right of where the shooting occurred and would only give his first name, DeSean. From his window he saw an officer shoot into the doorway from the sidewalk, he told me.

One officer walked to the front of the house from the back, using a passageway that runs between DeSean’s house and Legrier’s house. Another officer got out of a squad car that was parked in the street, DeSean said. One of the officers walked up the stairs and knocked. Then he ran back to the sidewalk and drew his gun “like he was in position to shoot,” DeSean said.

The officer didn’t say anything when he knocked on the door, DeSean said. Jones opened the door a few minutes later, he recalled.

“When [Jones] opened that door she was like, ‘Whoa, whoa, whoa!'” DeSean said. “Like, ‘Slow down—wait, wait, wait!’ That’s what she meant.” He said there had been 15 or 20 seconds between when Jones opened the door and when the officer opened fire.

“You can see clearly”

DeSean and William, another neighborhood resident who witnessed the aftermath of the shooting, told me the porch was brightly lit, so the officer should have been able to see a woman in the doorway. William said, “There’s nothing dark about it. You can see clearly.”

DeSean said he didn’t see Jones get hit but heard the shots and could see the officer pulling the trigger. He said there were two or three officers at the house when the shooting occurred.

After the shooting, several neighbors came outside. When DeSean looked into Legrier’s house, he says he saw Quintonio laying on top of Jones’ body in the hallway. Two ambulances arrived after five or six minutes, DeSean said and brought Quintonio and Jones out.

Antonio Legrier has filed a wrongful death suit against the city, alleging that authorities have a video of at least part of the incident, and that an officer shot Legrier from 20 to 30 feet away. The Independent Police Review Authority is investigating the shooting.

The name of the officer who fired the gun has not been released.

According to local TV station CBS 2, which cited unnamed sources, the officer is in his 20s and is a former Marine. He entered the police academy in October 2012 and graduated six months later in March 2013, the report says. He was a probationary officer for 18 months after completing training. So at the time of the shooting he had been on patrol as a full-fledged officer for just over a year, according to the report.

The officer has been placed on 30-day administrative duty while the IPRA investigates, in accordance with a new department policy instituted by Interim Police Superintendent John Escalante. The new policy “will ensure separation from field duties while training and fitness for duty requirements can be conducted,” the department said in a statement.

Neither the Chicago Police Department nor lawyers for the Jones and Legrier families could be reached immediately for comment.