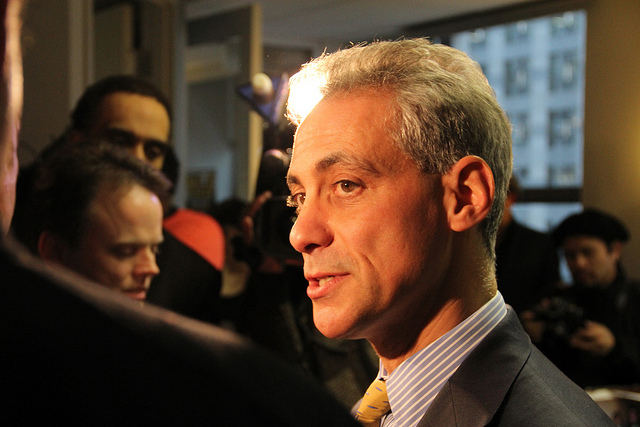 Over the past couple of weeks, Chicago Mayor Rahm Emanuel has been busy doing damage control related to his administration’s botched handling of Laquan McDonald’s killing by police. Last week, the mayor fired his top cop and begrudgingly welcomed an investigation by the Department of Justice. On Monday, after a high-ranking detective stepped down (plenty of critics have been calling for Emanuel’s head, too), officials released video from last October’s fatal police shooting of Ronald Johnson (another black man), and US Attorney General Loretta Lynch accepted Emanuel’s invitation, announcing a DOJ probe into the Chicago Police Department’s use of force. The biggest remaining question is whether the DOJ—or the mayor, for that matter—will tackle the city’s other major police scandal.

It began in February, when Guardian US, the American edition of the British daily, published the first in a series of articles questioning doings at a Chicago police detention facility known as Homan Square. Police hold and interrogate suspects at the facility, a former Sears warehouse in a predominantly black, low-income neighborhood on the city’s West Side. But it’s neither jail nor booking station. Attorney Flint Taylor described Homan to me as “an intelligence gathering place” akin to a CIA “black site.” In October, he filed a federal civil rights lawsuit on behalf of three clients who allege they suffered unconstitutional abuses while detained there.

On the basis of internal Chicago police records, the Guardian‘s Spencer Ackerman reported in February that officers had brought thousands of detainees (mostly black, often low-level drug offenders) to Homan Square, where they were essentially “disappeared”—held and questioned without access to attorneys or phone calls. Of 7,185 people detained there since 2004, Ackerman wrote, just 68 had access to a lawyer or were able to make their whereabouts known to family or friends—about 65 percent of the detentions took place after May 16, 2011, when Emanuel took office.

The mayor’s handling of the McDonald shooting, says Commissioner Boykin, casts “even more doubt on the repeated police denials of wrongdoing at Homan Square.”

Those cases were traceable only because the interrogations resulted in an arrest, Taylor points out. Nobody knows how many more people were detained for a time and then released. Homan Square keeps no booking records, according to a sworn deposition of a police researcher in September. Lawyers told Ackerman that the process of locating a client there could be a nightmare—attorneys struggle even to find a phone number for the facility and are routinely turned away when they show up in person. One lawyer said the site was “guarded like a military installation.” Another called it “a scary place” that resembles “something from a Bond movie.” Detainees have claimed that officers tried to turn them into informants, threatened them (and their families) with violence and false charges, and in one case even sodomized a man with a metal object (possibly the barrel of a handgun) after he refused to help officers buy drugs as part of a sting operation.

In response to Ackerman’s exposés, the police department released a statement insisting that it “abides by all laws, rules, and guidelines” when interviewing suspects and witnesses at Homan Square. Emanuel echoed that language in an interview with a local news program a week later. But now, with the nation’s eyes on Chicago, the scandal is primed to explode again. The Cook County Board of Commissioners has scheduled its first official hearing on Homan Square for December 15. The administration’s handling of the Laquan McDonald shooting, says Commissioner Richard Boykin, casts “even more doubt on the repeated police denials of wrongdoing at Homan Square.”

On Monday, asked whether the mayor’s office stands by those denials, a spokesman declined to comment. The city already has been the target of three civil lawsuits this year by former Homan detainees. One of Taylor’s clients alleges that while he was detained there in 2013, one officer held a knife to his neck and another shackled him to a bench in a cell without food, water, or bathroom access. This treatment, the suit alleges, came after the man refused to divulge information about drug dealing in his neighborhood.

“Homan Square is kind of the elephant in the room with regard to all that’s going on—the police shootings and the videotapes and all of that.”

Taylor claims police interrogated his client in a dark room, subjected him to sensory deprivation and racist verbal abuse, and threatened his family in their quest to obtain information he didn’t have. The man was ultimately charged with manufacturing and distributing heroin, but a judge dismissed all charges after the arresting officers were discredited on the witness stand. (By that point, Taylor’s client had spent 15 months in a county jail awaiting trial.) In another suit, three men alleged that masked, black-clad officers kidnapped them from a deli at gunpoint in 2011 and brought them to Homan Square, where they were held in a “cage” for eight or nine hours.

In March, Boykin—who has toured the facility and wants it shut down—joined Rep. Danny Davis (D-Ill.) in hand-delivering a letter to then-US Attorney General Eric Holder seeking a federal investigation into the complaints. In October, citing new revelations from the Guardian, Boykin repeated the request in a letter to Lynch, Holder’s successor. (In her press conference on Monday, Lynch indicated she might be open to an expanded investigation, and referred to the Homan Square concerns as “extremely important.”)

Boykin says Ackerman will speak at next week’s commissioners hearing, as will an NAACP rep and former Homan Square detainees and their attorneys. Chicago police officials are invited, too, he said, and he “would not be surprised” if a DOJ rep was in the house. The American Civil Liberties Union of Illinois, which is also pushing for a federal investigation of Homan Square, will be there as well; local Black Lives Matter activists are scheduling a protest of the facility on December 10. Lynch “made it clear she wants to hear from community groups—ordinary people—about their interactions with police,” Boykin says. “So I’m hopeful that from this hearing will flow information that will persuade the Justice Department to expand its probe.”

The treatment of his clients at Homan Square meets the UN’s definition of torture, says lawyer Flint Taylor.

This is hardly the first time Chicago police have been accused of violating the rights of criminal suspects. In May, the city agreed to pay $5.5 million in reparations to more than 50 people tortured into giving confessions in the 1970s and 1980s under police commander Jon Burge, who was convicted in 2010 and sentenced to four and a half years in federal prison for his role. Attorney Taylor was involved in the lawsuit that led to the Burge settlement. The treatment of his Homan Square clients also meets the United Nation’s definition of torture, he says—what makes the situation unique is that the city’s dubious tactics are “centralized” now.

“Homan Square is kind of the elephant in the room with regard to all that’s going on—the police shootings and the videotapes and all of that,” Taylor says. “Whether it’s Burge’s torture, Homan Square, or shooting down unarmed African American young men. Whether it’s transparency and properly disciplining the kinds of cops who repeatedly do these things. All of this is part of an integrated whole that needs to be looked at. Until you start to view it all as a systemic problem, you’re not going to be able to attempt to remedy any of it.”