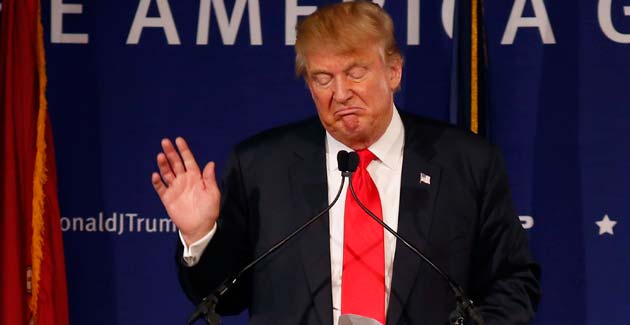 CORRECTION: Others have pointed out that in this quote, Donald Trump said, “The wife probably radicalized him.” Given that this comment occurred during cross-talk, while he was on the phone, this seems to be a more accurate description of what he said. We apologize for the error.

A bizarre exchange occurred on MSNBC’s Morning Joe on Tuesday. Donald Trump was doing a phoner. Naturally, the big subject of the day was his unconstitutional, unworkable, and outrageous proposal to ban Muslims—including American Muslims traveling abroad—from entering the United States. And Trump was defending his idea (and praising Franklin D. Roosevelt’s internment of Japanese Americans). At one point, Trump said he hoped his ban “doesn’t take long,” but then he went on about the report that a deposit of $28,500 was made into the account of Syed Farook, the husband in the couple who mounted the San Bernardino attack last week. He said:

How many other checks were sent to people all over the country that had been radicalized? Nobody knew this guy was radicalized. I probably radicalized him.

I probably radicalized him? So was Trump suggesting that his own harsh anti-Muslim rhetoric had radicalized Farook? If so, that would seem to be an admission that his approach is counterproductive and dangerous. Yet Trump does not admit mistakes, right? If he did, that would be huge.

Journalist Mark Halperin, who was questioning Trump at the time, did not follow up regarding this comment. The Onion, though, foresaw this campaign moment with an article it published yesterday. The headline: “Trump Gives Muslim On Fence About Radicalizing Just The Push He Needed.”

You can watch Trump’s remark here:

The full interview is here.