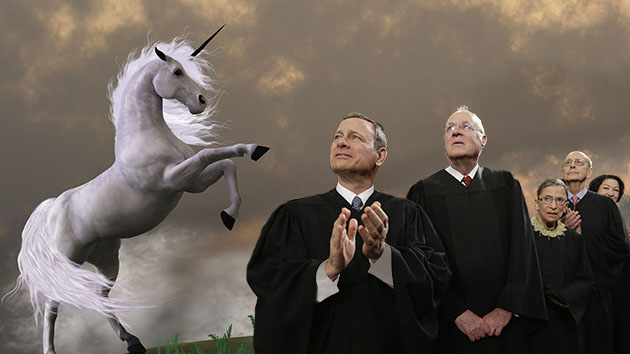 On Tuesday, the Supreme Court will examine the bedrock principle of “one person, one vote” in a major case that could yield the Republican Party a critical advantage in future elections. In Evenwel v. Abbott, the court is being asked to change how states draw legislative districts in a way that would boost the electoral power of white, rural voters, who lean Republican, at the expense of Latinos and African Americans, who tend to vote Democratic. The plaintiffs behind this high-stakes legal challenge are an unusual pair. One is a Texas tea party activist who has promoted a conspiratorial film suggesting President Barack Obama’s real father was Frank Marshall Davis, a supposed propagandist for the Communist Party. The other is a security guard and religious fundamentalist who believes the Earth doesn’t revolve around the sun and that unicorns were real.

Texas residents Sue Evenwel and Ed Pfenninger want the court to create a uniform national standard for drawing legislative districts based on the total number of eligible voters in them, as opposed to the total number of people, which is the standard that Texas and many other states use now. Such a change would effectively diminish the political clout of urban areas, which have large populations of people who can’t vote, such as felons, children and noncitizens.

If the court agrees, states throughout the country could be compelled to shift their legislative districts to conform with the ruling, causing a massive upheaval in the political system with serious repercussions for minority voters. Some experts have said such a change is completely unworkable because of the unreliability of voter registration data. And many civil rights groups see it as nothing but a GOP power grab. “These plaintiffs in Texas are interested in stemming the growth of Latino political power,” contends Thomas Saenz, president and general counsel of the Mexican American Legal Defense and Education Fund.

Ed Pfenninger has described the Catholic Church as “the Mother of Harlots” and said that Jews are “enemies of the cross.” And then there are the unicorns.

Who are the plaintiffs who want to redraw the political map? Evenwel is a Texas GOP and tea party activist who was a big supporter of former Gov. Rick Perry, who appointed her to serve on the Texas Funeral Service Commission, which oversees the funeral industry. She’s the longtime chair of the Titus County Republican Party and a member of the Texas state Republican Party executive committee. In the past, she’s been a political booster of tea party favorites including former Rep. Michele Bachmann (R-Minn.), Sarah Palin, and former Florida Rep. Allen West (R-Fla.). Lately, she’s championed the presidential bid of Sen. Ted Cruz (R-Texas). Evenwel did not return a call or email requesting comment.

In 2012, the Evenwel-led Titus County GOP hosted a screening of Dreams From My Real Father: A Story of Reds and Deception, the docudrama that suggests Obama’s real father was Frank Marshall Davis, a man the film’s promotional material describe as a “Communist Party USA propagandist who likely shaped Obama’s world view during his formative years.” On her Facebook page, Evenwel has also approvingly touted a story from the conservative website WorldNetDaily questioning whether Obama was really born in America.

Evenwel is an outspoken critic of illegal immigrants, and she has claimed on the Titus County GOP’s website that the state’s present legislative boundary-drawing process has the primary objective of giving “equal representation to a block of undocumented people who are not eligible or registered to vote.” Evenwel has also lashed out at Muslims, warning in an op-ed that showing tolerance to them means that Shariah law could “usurp the US Constitution.” And she has claimed that all money donated to mosques funds jihad.

Her co-plaintiff, Ed Pfenninger, has expressed some equally eyebrow-raising views. A Christian fundamentalist who works as a security guard in Porter, Texas, Pfenninger operates a YouTube channel where he’s posted hours of videos of himself expounding on his beliefs. For instance, he’s described the Catholic Church as “the Mother of Harlots.” He’s also said that Jews are “enemies of the cross,” and that God created Adolf Hitler and the Holocaust because he “wanted the Jews back into the Land.” Pfenninger also cites the Bible to justify his belief that women with short hair are somehow shameful. In response to a commenter on one of his videos, he wrote:

Pfenninger has scorned science and claimed that “geocentricity”—the medieval belief that the Earth is the center of the universe—”is a Bible fact. It its not theory…the earth is standing still in the middle of the universe.” The notion that the Earth revolves around the sun, according to Pfenninger, “is part of the Copernican revolution, which is anti-Biblical, and in fact led to the acceptance of evolution. Christians will fight against evolution but you’ve got to go a little further back and fight against the root of evolution, which is the heliocentric movement.”

And then there’s the unicorn, which appears repeatedly in Pfenninger’s online posts. Arguing with a commenter to one of his YouTube videos, Pfenninger wrote in 2013 that the “unicorn was a real creature known for it’s [sic] great strength, and is also referred to in ancient literature.” Pfenninger did not respond to an email requesting comment.

The Evenwel case was orchestrated by Edward Blum, the director of the Project on Fair Representation, a nonprofit funded by secretive conservative donors. Blum recruited the plaintiffs, and his nonprofit is bankrolling the legal expenses. A former stockbroker who isn’t a lawyer himself, Blum has earned a reputation as a one-man legal crusader against civil rights and affirmative action laws. Two years ago, he helped to successfully orchestrate a legal challenge to the venerable Voting Rights Act, Shelby County v. Holder, which resulted in the Supreme Court gutting a critical section of the law designed to prevent discrimination in voting.

By Blum’s own standards, though, Evenwel and Pfenninger may fall short as model plaintiffs. Blum, who says he’s known Pfenninger for 15 years, was unfamiliar with Pfenninger’s views on science and was outraged at any suggestion that he should have vetted his plaintiff’s religious beliefs. “These are civil rights cases. I don’t need to quiz everyone about their views on climate change, evolution, or global warming. I just need to know that someone is not a bigot. If Ed Pfenninger is not a bigot, a racist, or a homophobe or an anti-Semite, then he will fall within my purview as a legitimate client.”

In fact, Pfenninger has written and said a number of things over the years on his YouTube channel disparaging gays and Jews. In 2010, he told one commenter that in the Bible, “homosexuality is condemned as a ‘vile affection’ (Rom.1:26) and that is a universal, eternal, unchanging truth.” He’s referred to gays as “sodomites” and has said homosexuality is a “perversion” akin to incest.

When I directed Blum to inflammatory statements made by Pfenninger and Evenwel, he replied via email with a short statement. “I remain persuaded that my clients are not bigots, racists, or anti Semites.”

Evenwel v. Abbott isn’t the only Blum-inspired case that will be argued before the Supreme Court next week. The court will also hear Fisher v. University of Texas, a case featuring another Blum-recruited plaintiff who is challenging the University of Texas’ use of race in a sliver of its admissions decisions. Abigail Fisher claims she was denied admission to the state’s most prestigious public school, the University of Texas-Austin, in 2008 because she is white. As it turned out, though, Fisher’s grades and test scores wouldn’t have gotten her admitted to the university even if she’d been black, according to documents in the case. Nor was she completely shut out of her school of choice. The university told her that if she attended another school in the Texas system for a year and maintained a 3.2 grade point average, she could transfer to the flagship Austin campus as a sophomore—an offer she rejected.

Fisher’s case is now on its second trip to the high court. In 2013, the court voted in Fisher’s favor and sent the case back to the 5th Circuit Court of Appeals to take a closer look. It did, and once again it sided with the university. Consequently, the Supreme Court is hearing Fisher’s case again, even though Fisher has long since graduated from Louisiana State University. The only thing Fisher can win at this point is the return of her $100 admission fee.

Citing Fisher and Evenwel, University of California-Irvine law professor Rick Hasen says Blum has a history of handpicking plaintiffs with dubious claims of injury to headline the ideologically driven cases his nonprofit engineers and bankrolls. He says, “This seems to be a theme in the cases Ed Blum has brought.”