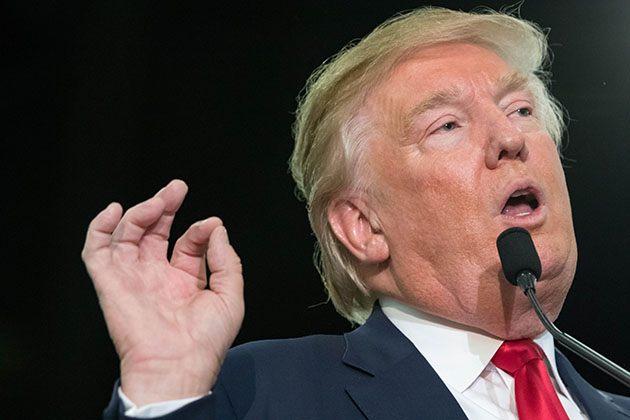 Would Donald Trump really get Republicans to the polls in November?Richard Ellis/Zuma

Donald Trump and Ben Carson may lead in the GOP primary polls, but if one of them actually became the nominee, some Republicans might not vote at all come November 2016. Hillary Clinton’s candidacy might also be a disincentive for some Democrats to go to the polls. Even though the election is a year away, a Google survey conducted over the weekend explored the gap between party loyalty and possible nominees and found that some party loyalists might opt out of the 2016 election if faced with a candidate named Trump, Carson, or Clinton.

The survey asked people who planned to vote and self-identified as either Republicans or Democrats (roughly 1,500 identifying with each party) whether they were more or less likely to vote for their party’s candidate based on the nominee. For Republicans, the choices were Trump and Carson. For Democrats, they were Clinton and Bernie Sanders.

Carson fared better, with slightly more than 41 percent in the “less likely” camp, and 35 percent saying that Carson as the nominee would make no difference to them:

For Sanders, 41 percent also said that if he were the nominee it would make no difference. But compared with Clinton, fewer respondents said that having Sanders as the nominee would make them less likely to vote (32 percent), and more said he’d make them likelier to vote (26.7 percent, a full 10 percentage points higher than Clinton):

This is only one snapshot a few months before the first primary, but it sheds some light on what might happen next November when the campaigns are over and voters finally cast their ballots.