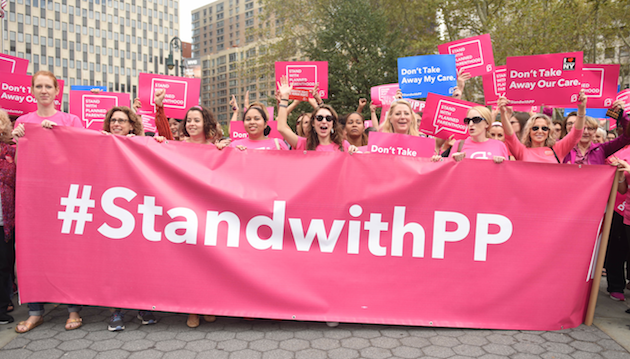 Planned Parenthood announced on Thursday that it will endorse Hillary Clinton for president—a choice that, while unsurprising, marks the first time the women’s health organization has endorsed a candidate in a presidential primary. The group will make the formal endorsement this Sunday at a campaign event in New Hampshire.

.@HillaryClinton understands the lives of women & has been fighting for them her entire life.

Clinton followed up by expressing her support of the embattled women’s health organization.

I’ll take on Republicans or anyone who tries to interfere with women’s health. Proud to have @PPact‘s support in this important election. -H

The New York Times reports the endorsement will open up $20 million from the advocacy wing of Planned Parenthood to help Clinton and Senate candidates around the country this election year.

The news comes the day after Congress voted to defund the organization for the eighth time over the past year. After a series of heavily edited videos claiming to show Planned Parenthood officials discussing the sale of fetal tissue were released in July, the organization has faced an onslaught of attacks and threats to pull millions of dollars in both federal and state funding.

“This week was a jarring reminder of what’s at stake in 2016,” Clinton said in a statement on Thursday. “For the first time ever, the United States House and Senate passed a bill to defund Planned Parenthood and repeal the Affordable Care Act.”

“We need a president who has what it takes to stop Republicans from defunding Planned Parenthood and taking away a woman’s right to basic health care,” she added. “If I’m elected, I will be that president.”