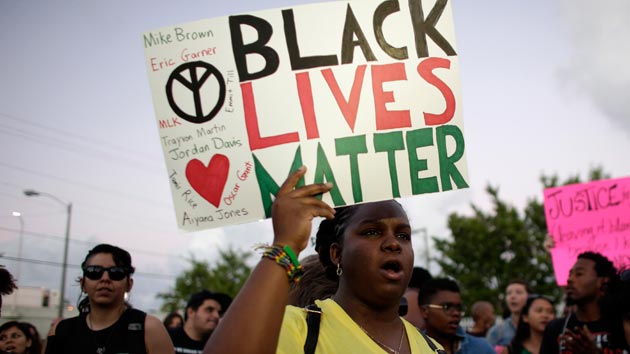 As “Black Lives Matter” chants have grown common in communities nationwide responding to police violence against black men and women, opponents of the BLM movement have controversially altered the phrase to “All Lives Matter.” Now, Missouri state Republican Rep. Mike Moon has introduced a bill that further co-opts BLM’s rallying cry, this time for his anti-abortion agenda. Titled the “All Lives Matter Act,” the bill would define a fertilized egg as a person, asserting that life begins at the moment of conception and that embryos have the same rights as humans.

Reproductive rights advocates and activists say this use of the language of Black Lives Matter opponents is an affront to the BLM movement and especially to black women. “By hijacking the prolific chant that has become the title of a movement led by a new generation of human rights activists and recontextualizing it, Rep. Moon is further marginalizing Black women,” writes Christine Assefa at the Feminist Wire.

“Black women have had very little reproductive choice, historically. During slavery, they were forced into childbirth. Then, they were forced into methods for sterilization,” wrote Alison Dreith, the executive director of NARAL Pro-Choice Missouri, in a column for the St. Louis American. “This bill continues the trend in Missouri, that women should not make their own decisions.”

The legislation has been moving through the Missouri House since its 2016 session began last week. Missouri already has a “personhood” law in place, but this bill would make the provision more extreme by repealing part of the law that says that the state personhood law must still comply with the US Constitution and Supreme Court precedent such as Roe v. Wade, the landmark case that legalized abortion.

Without such a caveat, this personhood bill would virtually wipe out abortion access—and likely be found unconstitutional. In general, personhood bills can also restrict some methods of contraception because both the morning-after pill and IUDs can prevent an already-fertilized egg—a zygote that is considered a “person”—from implanting in the uterus. Opponents say such measures can also upend laws around abortion access. These laws usually preserve a woman’s right to an abortion as established by Roe, but they establish the fetus as a “person,” say, in the case of the murder of the mother or if the pregnancy, usually later term, results in a miscarriage. Under these laws, in vitro fertilization can be made illegal, and women who miscarry can potentially be investigated and prosecuted for fetal homicide.

Personhood ballot measures have been roundly rejected by voters in many states—most recently in North Dakota, Colorado, and Mississippi—but are already on the books in Kansas and Missouri. Courts in Oklahoma and Alaska have also struck down personhood initiatives.

In Missouri, this bill is just one of several initiatives seeking to further the state’s existing abortion restrictions. A current state Senate bill proposes tightening rules around fetal tissue donation, physician admitting privileges—by requiring abortion clinic doctors to have surgical privileges at a nearby hospital—and abortion clinic inspections, proposing that the state’s health department be required to conduct unannounced inspections of abortion clinics annually. Today, the entire state of Missouri only has one clinic that performs abortions after a Columbia clinic was forced to stop offering abortions last November when a local hospital pulled the clinic doctor’s admitting privileges.

“There are two anti-abortion laws in the Senate already. And 11, maybe 12, in the House,” says NARAL’s Dreith. “And our first day of session was Wednesday, so it hasn’t even been a full week yet. It’s going to be a long year.”

As for the title of the bill, Rep. Moon did not respond to Mother Jones‘ request for comment about why he named the measure the “All Lives Matter” act. But the title was bound to garner controversy. The Black Lives Matter movement ramped up in Ferguson, Missouri, after the police killing of unarmed black teenager Michael Brown in August 2014. On the day that Moon prefiled the All Lives Matter Act, a different state representative prefiled a bill that would revoke athletic scholarships from college athletes who refused to play for any reason other than health. The bill was filed just a few weeks after more than 30 black football players at the University of Missouri refused to play as part of a protest against the university president and the school’s negligence on issues around racism and a lack of diversity on campus. The coincidence of these bills being filed on the same day is telling, says NARAL’s Dreith.

“Reproductive health is intrinsically linked to racism and to the Black Lives Matter movement,” Dreith says. This bill, she notes, shows that “the lives of women—and especially black women—do not matter to this legislator.”