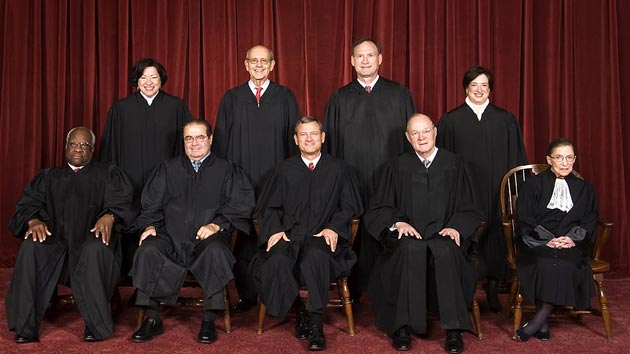 Steve Petteway/ Collection of the Supreme Court of the United States

On Friday, the Supreme Court announced that it will hear its first abortion case in nine years. At issue in Whole Woman’s Health v. Cole is HB 2, an omnibus Texas abortion law that made national headlines in 2013 after Texas Sen. Wendy Davis spent 11-hours filibustering the bill that eventually passed anyway.

Since 1992, the court has ruled on three abortion cases, each time affirming further abortion restrictions. In 1992, in Planned Parenthood v. Casey, a divided court upheld the right to abortion, but left it to the states to set abortion restrictions, saying that these regulations can’t put an “undue burden” on abortion access. This broad ruling opened the door for the hundreds of so-called Targeted Regulation of Abortion Providers or TRAP laws that states have passed in recent years—onerous regulations placed on abortion providers, often purporting to protect women’s health. In its last ruling in 2007, the court upheld a law outlawing dilation-and-extraction second-trimester abortions. If the court continues its pattern of voting against abortion rights and rules to allow Texas to move forward with several burdensome abortion restrictions, it will open the door for other states to do the same, dealing a serious blow to the right to legal abortion guaranteed by Roe v. Wade.

“The Court now has the opportunity to decide whether we will continue to allow elected officials to play politics with women’s health.”

“The Court now has the opportunity to decide whether we will continue to allow elected officials to play politics with women’s health,” wrote Ilyse Hogue, the president of NARAL Pro-Choice America, in a statement. “This case represents the greatest threat to women’s reproductive freedom since the Supreme Court decided Roe vs. Wade over 40 years ago. Laws like the ones being challenged in Texas are designed to subvert the Constitution and end the right to a safe and legal abortion.”

In this case, the justices are expected to focus on two of the Texas law’s most onerous requirements: that abortions be performed in ambulatory surgical centers, hospital-like facilities that specialize in outpatient surgery, and the requirement that abortion providers obtain admitting privileges at a nearby hospital. Many medical professionals argue that these restrictions put unnecessary burdens on abortion providers: Building and maintaining an ASC is expensive, given the strict requirements regarding features like hallway width and ventilation. Nor do ASCs enhance the standard of care for abortion; the American College of Obstetricians and Gynecologists and other medical groups have repeatedly noted that the procedure can be safely performed in a typical doctor’s office. The admitting privileges’ provision gives hospitals in conservative communities or with a religious affiliation the power to effectively stop abortions by denying the necessary admission privileges to doctors.

“The common-sense measures Texas has put in place elevate the standard of care and protect the health of Texas women,” wrote Texas Attorney General Ken Paxton in a statement released following Friday’s Supreme Court’s announcement. “We look forward to demonstrating the validity of these important health and safety requirements in Court.”

The number of abortion clinics in Texas has already been cut by more than half, as elements of HB 2, such as restrictions on medication abortion, a 20 week abortion ban, and the admitting privileges requirement, have gone into effect over the last two years. Before the law, there were 41 clinics in Texas. Today, there are 18. As my colleague Molly Redden reported in September, this has created large swathes of the state where women must travel hundreds of miles to get abortion care. If the Supreme Court upholds HB2 in full, including the ambulatory surgical center requirement, the number of abortion clinics in Texas could fall to ten. 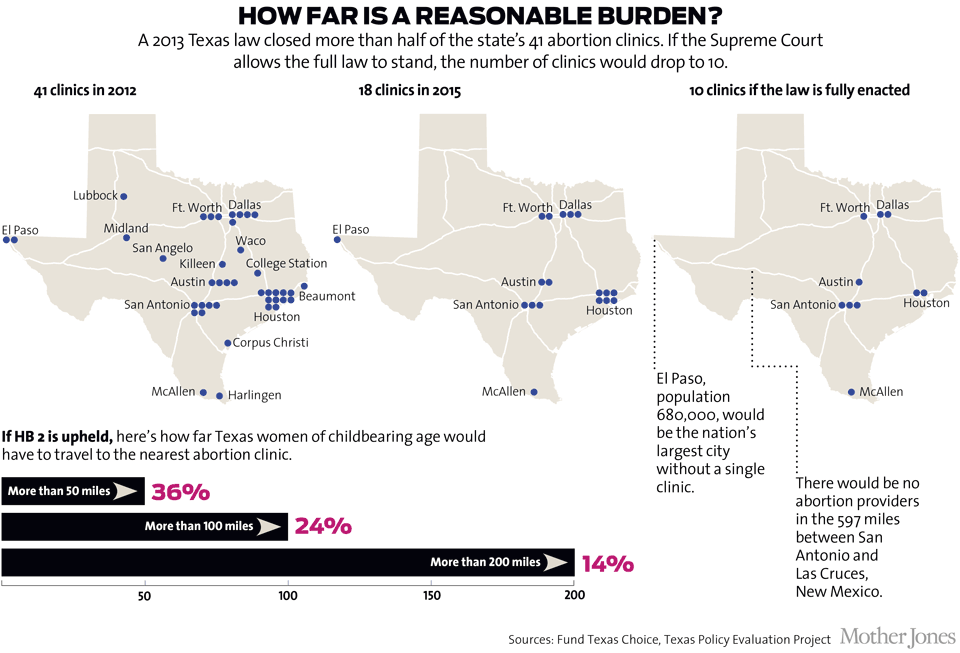 The Supreme Court has intervened on HB 2 twice before. In October 2014, the court reinstated a district court’s ruling that blocked the ambulatory surgical center provisions of HB2 from going into effect and triggering more clinic closures while the Fifth Circuit court considered the case. At that time the high court also overturned the admitting privileges requirement for two Texas facilities. In June 2015, after the Fifth Circuit ruled to allow the HB2 provisions to go forward, the Supreme Court put an emergency stay on these requirements, to remain in effect while the court decided whether to take on Whole Woman’s Health for a full review.

Planned Parenthood and other abortion providers in Texas have been preparing to comply with HB2’s new requirements since mid-2014, when the law was originally slated to go into effect. Planned Parenthood, for instance, has spent millions to build or refurbish several ambulatory surgical centers in the state. Mother Jones traveled to Texas to observe these preparations for HB2. Check out our video footage below. (Some of the video numbers have since changed slightly.)

The court has not yet announced whether it will also take Jackson Women’s Health Organization v. Currier, a case that centers on a Mississippi law that requires abortion providers to obtain admitting privileges at a nearby hospital, but given that they’ve taken the Texas case, it is unlikely. Mississippi currently has only one abortion clinic, and its abortion providers are board-certified OB-GYNs. But because hospitals in the area have been unwilling to grant—or sometimes even process—the doctors’ applications for admitting privileges, if this law stands, it will close down Mississippi’s last abortion clinic. In July 2014, the fifth circuit court of appeals ruled that the law was unconstitutional, upholding a lower court’s ruling.

A decision in the Texas case will come down in the first half of 2016, likely making reproductive rights a central issue in the presidential election. “Although this is the first step in a much longer process,” said Amy Hagstrom-Miller, the president and CEO of Whole Woman’s Health, the main plaintiff in the case. “I am hopeful that the Supreme Court will uphold the rights that have been in place for four decades and reaffirm that every woman should be able to make her own decision about continuing or ending a pregnancy.”

This is a breaking story. We will update this post as the story develops.