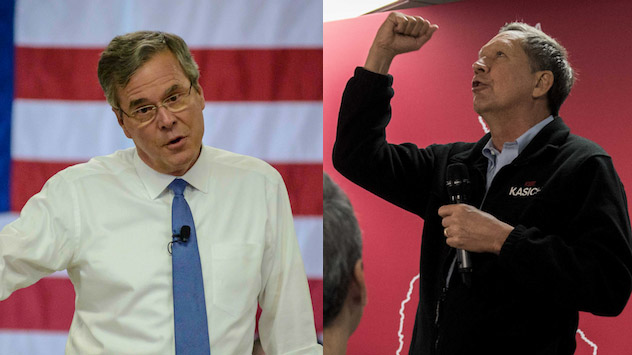 So far, the Republican presidential contest has been like a Quentin Tarantino film in which the main characters end up in a circular firing squad or a multisided Mexican standoff and don’t know whom to target—or from which direction an attack might come. Donald Trump has rotated the target of his volleys, and the other Republican contenders have often seemed puzzled whether to go after the front-runner or focus on a candidate who is a more direct competitor for a certain slice of the GOP electorate.

Trump, at different times, has needled Jeb Bush, Rand Paul, and Ted Cruz. Bush, at one point, attempted—feebly— to take a poke at Trump. Bush and Marco Rubio have tangled with each other. Cruz and Rubio have done the same. On Saturday night, in the most consequential clash of the campaign, Chris Christie unloaded on Rubio during the New Hampshire debate, forcing the one-term senator to commit a blunder that may have derailed his campaign permanently. Trump, Cruz, Kasich, and Bush—especially Bush—no doubt appreciated this greatly, though the harsh assault did not help Christie, who on Wednesday appeared set to suspend his campaign. As the non-Trump field has shifted, the one-on-ones have changed. And with the New Hampshire results, it seems inevitable that a coming matchup will pit Kasich against Bush.

This could be an odd battle. Kasich placed second in New Hampshire, Bush came in fourth, and both are governors (Bush is an ex-) who emphasize their policy chops and claim they want to stay positive. (Bush has referred to immigration to the United States as an “act of love,” and Kasich, as part of his campaign pitch, has called on people to slow down and listen more to each other.) Both are from and pals of the GOP establishment. Both tout their executive experience and claim to have reasonable demeanors. Both seek to win the fancy of moderate, suburban Republicans. Each probably cannot survive long in the race without knocking the other out—sooner rather than later.

On Wednesday morning—that didn’t take long!—a Bush campaign operative told me that the Jeb crew was prepping to rip Kasich apart. There would be two lines of public attack at first: Kasich, as Ohio governor, has expanded Medicaid under Obamacare; and Kasich, when he was a member of Congress, sought to close military bases and decrease some military spending. “None of this will play well in conservative South Carolina,” the Bush operative said, with a smile, referring to the next primary state. (That state counts a high number of retired military veterans among its residents.) And the Bush camp’s message to funders and insiders is going to be this: Kasich does not have the money or the organization to compete in the weeks ahead when the race expands to more states holding elections at the same time, so don’t waste your bucks and time on him.

This operative was repeating the talking points that the campaign had quickly devised in the aftermath of New Hampshire to disseminate to top aides and surrogates. Politico obtained a copy, and here’s an excerpt: “Governor Kasich has little to no chance in South Carolina, and does not have a national organization that can compete. Kasich has consistently supported gutting the military and has no viable path in the Palmetto State.”

The Bush goal: to smash Kasich in South Carolina and preserve Jeb’s long and painful-to-watch slog as an establishment-friendly alternative to Trump and Cruz.

When I asked a Kasich strategist—a well-known establishment GOPer—about the Bush plan to demolish Kasich, he scoffed: “They came in fourth, and they’re calling on Kasich to get out of the race so Jeb can have a clean shot. Now that’s ridiculous.” He downplayed the significance of South Carolina and noted that the Kasich folks assume that four or five candidates will still be standing after the Palmetto State. He meant Trump, who has drawn great crowds there; Cruz, who is well positioned to round up evangelical voters in South Carolina; Kasich; Bush; and perhaps Rubio, if he can salvage his campaign. Kasich and his advisers hope the South Carolina primary will be dominated by a Trump-Cruz confrontation—the more sparks the better—and not a Bush-Kasich showdown. Their immediate aim is to slide past South Carolina and head to the early March contests, when Kasich might have better shots in several states, including Massachusetts, Vermont, Colorado, Minnesota, Virginia, and Michigan. His home state primary in Ohio is March 15.

But does Kasich have the cash and organization to compete on all these fronts? “People are taking our calls now,” the Kasich strategist says. He says there is no way Kasich will lead in the delegate count come mid-March. But the campaign wants to demonstrate that Kasich will be a long-run candidate. Can this happen without getting into vicious combat with Bush? “Well,” the Kasich strategist remarks, “he will try to stay positive.” That doesn’t appear to be the Bush plan. And it’s awfully hard to avoid a fight when the other fellow is dead set on it.

South Carolina has a history of below-the-belt politics, and the Bush family has been part of that. (See the 2000 GOP primary campaign, when the George W. Bush camp slimed John McCain to defeat.) The Bush clan knows how to get dirty in South Carolina. Regardless of what happens with Trump and Cruz, a Bush-Kasich brawl could well be the main event.