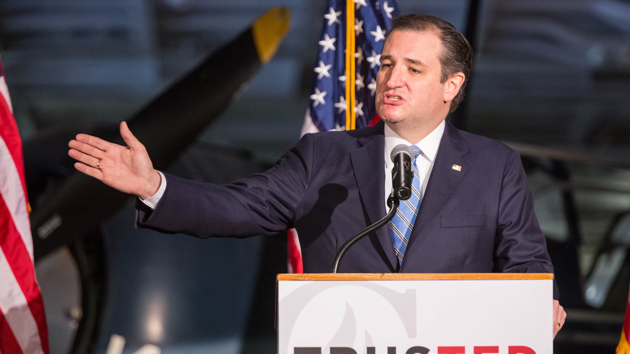 After a disappointing third-place finish in Saturday’s South Carolina Republican primary, Ted Cruz is looking to a new ally to boost his performance in the Nevada caucuses on Tuesday: the ghost of the late Supreme Court Justice Antonin Scalia.

Cruz seems to have settled on the idea that President Barack Obama won’t get a Supreme Court justice confirmed to replace Scalia. During a stump speech Monday afternoon in Las Vegas, Cruz said one of his first actions as president would be to name a “strong principled constitutionalist” as Scalia’s successor.

Cruz has begun to emphasize his legal career on the campaign trail in order to paint himself as the lone Republican candidate who can defend Scalia’s legacy. It’s a two-step dance to take down his rivals: heighten the stakes of the election to minimize Donald Trump as an unserious candidate, and push the idea that Marco Rubio isn’t conservative enough to be entrusted with picking Supreme Court nominees.

“As Ronald Reagan was to the presidency, so too was Justice Scalia to the Supreme Court,” Cruz said. “And his passing underscores the stakes of this election. It’s not one branch of government, but two that hang in the balance.”

Amid this doom and gloom, Cruz made sure to remind the crowd of Nevadans that he is a former lawyer who has argued before the Supreme Court, so he knows how the institution operates. At the same time, he repeatedly hammered the point that he wouldn’t waffle, vowing that he was the only Republican candidate the voters should trust to appoint truly conservative judges.

“I think Justice Scalia’s passing,” Cruz said, taking a veiled jab at Trump’s gutter politics, “has elevated the assessment of the men and women of Nevada.”