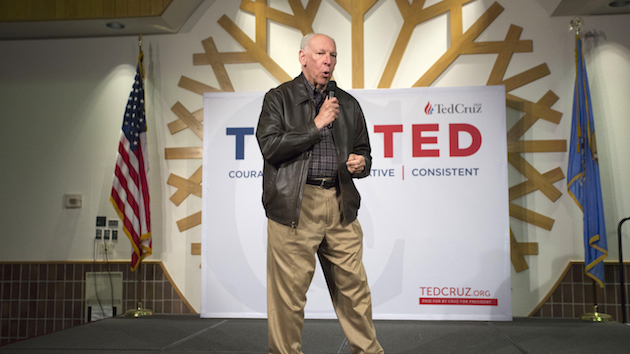 Rafael Cruz campaigns for his son in December.J Pat Carter/AP

Ted Cruz decided to run for president after God spoke to his wife, Heidi.

That’s how Rafael Cruz, Ted’s father and a born-again pastor, described his son’s decision-making process. Speaking on a syndicated radio show at the end of last year, the elder Cruz recounted that during a Sunday prayer session at a Texas church, Ted Cruz and his family sought God’s guidance as to whether the senator should enter the presidential race, and after two hours of praying, God sent a message to Heidi that essentially said: Go for it.

Here’s the story, according to Rafael Cruz:

My son Ted and his family spent six months in prayer seeking God’s will for this decision. But the day the final green light came on, the whole family was together. It was a Sunday. We were all at his church, First Baptist Church in Houston, including his senior staff. After the church service, we all gathered at the pastor’s office. We were on our knees for two hours seeking God’s will. At the end of that time, a word came through his wife, Heidi. And the word came, just saying, “Seek God’s face, not God’s hand.” And I’ll tell you, it was as if there was a cloud of the holy spirit filling that place. Some of us were weeping, and Ted just looked up and said, “Lord, here am I, use me. I surrender to you, whatever you want.” And he felt that was a green light to move forward.

That Rafael Cruz should cast his son’s presidential campaign as a divinely inspired endeavor is not surprising. For years, he has been a freelancing evangelical who has promoted an extremely fundamentalist version of Christianity and decried those, including other Christians, who do not share his religious views. He has called for fundamentalist Christians to gain control of most aspects of American society, and he has issued a series of controversial statements blasting President Barack Obama, gay rights activists, and other spiritual enemies. As Mother Jones first reported, he called Obama an “outright Marxist” who “seeks to destroy all concept of God” and urged Americans to send him “back to Kenya.” He said it was “appalling” to have a gay mayor in Houston and asserted that Satan was behind the Supreme Court decision that legalized same-sex marriage.

In most instances, it would be unfair to judge a politician based on a relative’s pronouncements. But for years—in his Senate race and in this presidential campaign—Ted Cruz has used his father to round up support from tea partiers, social conservatives, and evangelical leaders. The son, naturally, speaks lovingly of his father. Given that Cruz is seeking the presidency by courting the religious right and offering himself as a moral and godly candidate who shares the faith of evangelical voters—and given that he frequently quotes Rafael Cruz on the campaign trail to urge people to vote by God’s values—a voter can likely gain some understanding of Ted Cruz’s world (and perhaps his worldview) by examining the statements and professed beliefs of his father. And they are extreme.

It’s not hard to figure out Rafael Cruz’s basic message. He has given scores, probably hundreds, of sermons and talks at religious and political gatherings, and many are on YouTube. His primary theme is that the United States is a “Christian nation” and that only true believers who adhere to biblical principles—that is, who accept the literal truth of the Bible, as Rafael Cruz and other fundamentalists see it—are worthy of guiding the United States forward. He regularly rails against pastors and church leaders who eschew politics and do not enter the political fray to combat the enemy: secular humanism.

Rafael Cruz is an advocate of Christian dominionism, which essentially holds that fundamentalist Christians should take over, well, just about everything. Speaking at a Texas church in 2012, Rafael Cruz told the crowd that God instructed Adam and Eve to go forth, multiply, and, as he put it, “take dominion over all my creation.” He said this meant that true-believers ought to dominate all areas of life: “That dominion is not just in the church, that dominion is over every area—society, education, government, and economics.” (During that sermon, he also noted that husbands, not wives, should be the “spiritual leader” of their families.) In Cruz’s view, those who accept Christ and his word (as Cruz believes it should be understood) will prosper spiritually and financially. In that same sermon, he noted that God not only anoints priests to lead the faithful, but also anoints “kings…to take dominion.” By that, he means those who rule a nation, and, he adds, these rulers one day (and he makes it sound as if this day will come soon) will transfer the wealth of the “wicked” to the “righteous.”

The senior Cruz sees no difference between the religious and political realms. In a June 2013 speech at a men’s prayer breakfast, he contended that Jesus’ original followers were not looking for a “spiritual leader” but for a “political leader” who could establish “a physical kingdom on the Earth.” And Jesus, he noted, was “bucking the political establishment.” (Sound familiar?) “The ministry of Jesus,” he claimed, was a “highly political ministry.” So religion and politics do mix—a lot. “It’s not just a spiritual confrontation,” Cruz said. “It’s also a political confrontation.” Toward the end of that speech, Cruz declared, “We have a responsibility to elect righteous leaders. God is going to hold us accountable if we do not.” He added, “And the people will proclaim that Jesus Christ is lord and king of this nation.”

It’s not ambiguous. For Rafael Cruz, the only legitimate government is one that operates according to his theological views.

Those views tend to be rather harsh. He has referred to the theory of evolution as a diabolical plot mounted by Marxists, “the number one tool for communism to destroy religion, to destroy the concept of God.” Evolution, he claimed, “is one of the most effective tools to impose communism.” He has repeatedly said same-sex marriage is a satanic scheme, noting in a talk to a Republican group in 2013 that “homosexual marriage…has nothing to do with quote homosexual rights. It has to do with the destruction of the traditional family. So that there is no loyalty to the family. Loyalty is to the government. Government is your god.”

Obama, naturally, is propelling much of these underhanded machinations. The president, Rafael Cruz said three years ago, “needs you to see him as God.” He’s a Marxist, Cruz has charged, and his agenda “is to bring us down to a Third World country” and subjugate the United States to the United Nations. He has said that Obama “will side with the Muslims” and claimed that the Obama administration is “trying to take our God and our gun and if they do that, then they can impose a dictatorship upon us.” He insists Obamacare does include death panels. He has blamed liberals for allowing terrorists to cross the border “on a weekly basis” and establish “terrorist cells all across the United States.”

His is a dark perspective. The “wicked” are now ruling the country, and they must be defeated by the “righteous,” whom he defines as those evangelical Christians who embrace the literal truth of the Bible. (“Every word of Scripture is given by revelation,” he said in 2013. “Every word of this book is true. Because if you don’t believe one part of it, then none of it might be true.”) The righteous, he urges, must be guided by pastors across the nation to rise up and “take every position in office, from dog catcher all the way to the highest position in the land.” In a 2013 sermon, according to a partial transcript obtained by Mother Jones, he proclaimed that Satan “rules in the halls of legislation,” and said, “We have a responsibility to preserve the biblical foundations of this country.” He added, “The world will tell you, ‘We’re all children of God.’ That’s not true. Children of God are only those that have been born again through the blood of Jesus Christ.”

Rafael Cruz’s outlook on the world is exceedingly narrow and unforgiving. The only righteous Christian is the evangelical Christian who is “biblically correct.” These Christians must conquer the political world—vanquish those who are in league with Satan—and establish dominion over society by ruling in accordance with their definition of the word of God. And Ted Cruz was directly given the green light from God, via Heidi Cruz, to lead what is, in essence, a crusade to smite wickedness. (At a gathering of evangelicals in Iowa in 2013, Ted and Rafael Cruz joined in prayer with a pastor who said that “every tongue that rises up against [Ted Cruz] in judgment will be condemned.”)

Without saying it directly, Rafael Cruz calls for a theocracy. (He has often decried the notion of separation of church and state.) His religious rants are not irrelevant to the Ted Cruz campaign. Ted Cruz has consistently cited his father as a key influence in his life, and he has regularly deployed him as a political representative and surrogate. It’s often tough to bring up the subject of a candidate’s religious views during a political campaign. But Rafael Cruz’s radical fundamentalism—which positions most Americans on the side of wickedness—and Ted Cruz’s embrace of his father as not only a parent but a political partner and adviser raise an important question this campaign season: How much of the faith of his father does Ted Cruz share?