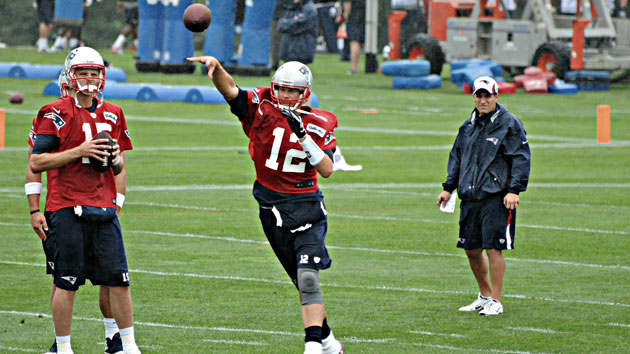 New Hampshire voters are angry. They believe a corrupt and power-hungry band of millionaire and billionaire families are running America into the ground, led by a coddled, vindictive, and dictatorial leader who doesn’t share their values and won’t help them win again.

Which is why they think NFL commissioner Roger Goodell needs to go.

“I’d like to moon him,” said Roberto Cassotto of Hampton, New Hampshire, as he waited in line for a Donald Trump rally on Thursday in Portsmouth.

One year ago this week, the NFL began investigating allegations that the New England Patriots illegally deflated footballs ahead of the 2014 AFC championship game. The league suspended Patriots quarterback Tom Brady for four games, fined the organization, and docked it two draft picks; Brady’s suspension was later overturned by a federal judge. In the 12 months since, “Deflategate” has transformed Boston sports radio into the football equivalent of InfoWars, falling deeper and deeper into the realm of conspiracy theory. Deflategate’s version of the melting point of steel is the Ideal Gas Law, which posits that extreme cold weather—of the variety that New England experiences in January—will naturally deflate balls.

Now, as Trump tries to hold off a pack of challengers in the Granite State, he’s hoping to get a boost from a powerful voting bloc—aggrieved New England Patriots fans whose suspicions of the NFL fit neatly with their suspicions of Washington. Other candidates have tried to channel enthusiasm for the Pats into a New Hampshire win. Ohio Gov. John Kasich brought Patriots legend Mike Vrabel (an Ohio State grad) with him to a town hall in Bedford. Marco Rubio has promised to appoint Brady to his cabinet. (An exception to this is Jeb Bush, who touted the endorsement of Peyton Manning, Brady’s rival, ahead of Super Bowl Sunday; oh, Jeb.) But no one has been more shameless about playing the Pats card than Trump, who tells every audience he sees—even outside New England—about his friendship with Brady, who kept a “Make America Great Again” hat in his Patriots locker and told reporters that he considered Trump a “friend.”

“I’m a friend of Tom Brady, very good friend, and he was so nice to me,” Trump told an Iowa radio host last month. “Because he said, you saw what he said a couple weeks ago. He called, he said, ‘Trump is the greatest winner.’ When you get that, and then all of sudden in Massachusetts.…we got poll numbers that were 52 percent.” Trump has been one of Brady’s loudest Deflategate defenders, calling the NFL’s punishment “ridiculous.”

The NFL really has presented no solid evidence the balls were deflated by the Patriots. Unlike jet fuel melting steel, the Ideal Gas Law is a real thing that anyone who’s driven in a northern winter can understand pretty easily. Brady was suspended for refusing to turn over his cellphone to investigators, not because of the results of the investigation itself. As an ESPN investigation coldly documented, the clearest explanation for all of this is that the NFL felt it went too easy on the Patriots for a different scandal a decade ago and went a little overboard. Patriots fans have a simpler explanation for why their team is being persecuted: “They hate us ’cause as they ain’t us,” one Trump supporter told me.

On sports radio, where conservative candidates go fishing for voters (in an hour and a half on Friday morning, I heard four pro-Cruz ads and one pro-Fiorina spot), they’re talking about nothing else. Hosts and their callers have begun to think the whole saga in distinctly political, if not outright religious terms. Someone on a midday program suggested the Patriots hire former George W. Bush spokesman Ari Fleischer to defend the team’s reputation in public, and a team of crack investigators to dig up opposition research on Goodell and feed it to journalists. When New York Times magazine scribe Mark Leibovich called into the “Dennis and Callahan” show to discuss a recent profile of Goodell, one of the hosts confessed that the whole league management reminded him of Scientology.

The foil to Brady is Manning, whose own indiscretions (the alleged purchase of human growth hormone) Pats fans believe have been swept under the rug by the establishment, which is to say the league office. Deflategate started as a sports story, but it’s becoming spiraled into something bigger—a story about a group of Americans who are sick and tired of a powerful and corrupt cabal picking winners and losers.

When I asked Jerry Elward, a Trump supporter who lives just across the state line in Wells, Maine, whom he considered more corrupt, Roger Goodell or President Barack Obama, he didn’t hesitate: “Goodell.” “Not very honorable,” Elward said. “I look at Trump the other way—very honorable.”

You get the picture. Tom Brady isn’t the single reason any of these folks are supporting Trump, but he is a useful stand-in for why they are.

“They should be together, like, Brady for vice president!” Cassotto told me. “I think Brady should throw a touchdown pass to Trump just as he goes up for his inaugural address. Brady should be on the other end of the stage and it should be a long bomb to Trump! And [Trump] should hold it up in the air,” Cassotto continued, his hands up above his head ready to haul one in. “‘America is great once again.'”