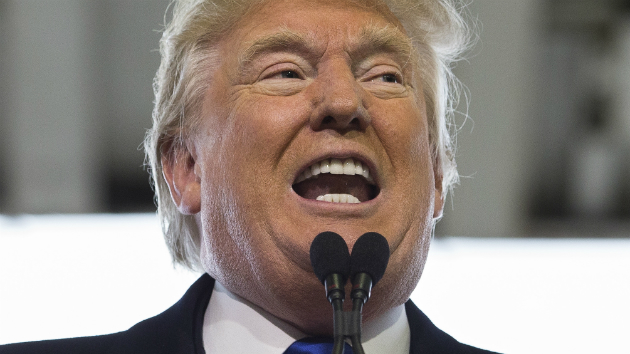 On the night of his big Super Tuesday victory, GOP front-runner Donald Trump gave a winner’s press conference and, as he often does, railed against the evils of outsourcing.

Contending that this economic problem is the result of politicians forgetting the American middle class, Trump continued: “Now they’re leaving from places that they used to move to into other parts of the world. We can’t let that happen. We’ve lost our manufacturing jobs. We’ve lost our manufacturing—millions and millions of jobs, thousands and thousands and thousand of plants, manufacturing plants, warehouses. I mean we are losing so much; we can’t let it happen.”

Yet a decade ago, before Trump was a politician, he had a much different view on outsourcing: It was often a good thing, he said. In 2005, Trump wrote a blog post on outsourcing that appeared on the website of his now defunct Trump University (which is the subject of a civil suit alleging fraud). The blog post was headlined, “Outsourcing Creates Jobs in the Long Run.” In it, Trump advised workers who lost their jobs to adopt a longer view and consider how outsourcing could be good for the overall economy. He wrote:

We hear terrible things about outsourcing jobs—how sending work outside of our companies is contributing to the demise of American businesses. But in this instance I have to take the unpopular stance that it is not always a terrible thing.

Sure, Trump acknowledged, outsourcing causes job loss, which is unfortunate, but it’s part of progress, he argued.

I understand that outsourcing means that employees lose jobs,” he noted. “Because work is often outsourced to other countries, it means Americans lose jobs. In other cases, nonunion employees get the work. Losing jobs is never a good thing, but we have to look at the bigger picture.

In his blog post, Trump embraced the conventional corporate line that outsourcing was often necessary for a firm to survive or thrive. He wrote:

I know that doesn’t make it any easier for people whose jobs have been outsourced overseas, but if a company’s only means of survival is by farming jobs outside its walls, then sometimes it’s a necessary step. The other option might be to close its doors for good.

In 2005, there was no fist-pounding about corporations that sent jobs overseas and the politicians who did nothing about it. By the way, at that time, Trump was selling ties and clothing under his Trump Collection line that were manufactured overseas.

These days, Trump routinely rails against companies that ship jobs to other countries. He says he will no longer buy Carrier equipment or eat Nabisco’s Oreos. And he has blasted Apple for manufacturing its products in China. When did he change his tune on outsourcing? The Trump campaign did not respond to a request for comment.