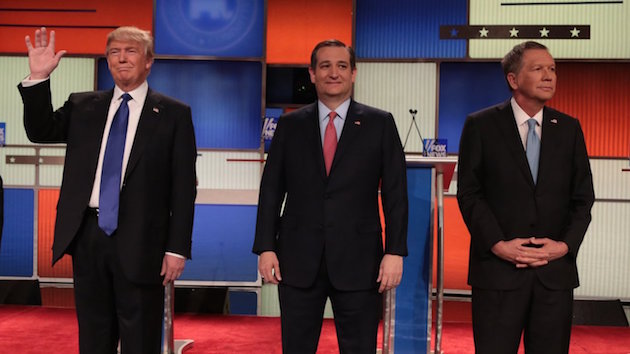 The three Republican presidential candidates had three very different takes Tuesday morning on how the United States should respond to the terror attacks in Brussels.

Donald Trump appeared on Fox and Friends, where he again called to “close up our borders.”

“It’s going to get worse and worse because we are foolish, we are foolish,” Trump said. “We can’t allow these people, at this point, to come into the US.”

“We can’t have these attacks anymore…It’s time to be smart.” – @realDonaldTrump reacts to #Brussels terror attackshttps://t.co/WKDL7FmTkd

We will name our enemy — radical Islamic terrorism. And we will defeat it. https://t.co/Z7YTgUg3AA

Later Tuesday morning, Cruz held a press conference, where he escalated his response, calling for the United States to use its “full force and fury” against ISIS.

“This is a war,” Cruz says in hastily arranged presser, calls for U.S. to use “full force and fury” against ISIS pic.twitter.com/JZTnMFAP6S

Cruz this morning (1/2): “In the wake of Brussels, we don’t need another lecture from Obama on Islamophobia…”

(2/2) “…we need to immediately halt the President’s ill-advised plan to bring in tens of thousands of Syrian Muslim refugees.”

We must strengthen our alliances to root out evil. Not dismantle them. #Brussels pic.twitter.com/fscW7zzD64