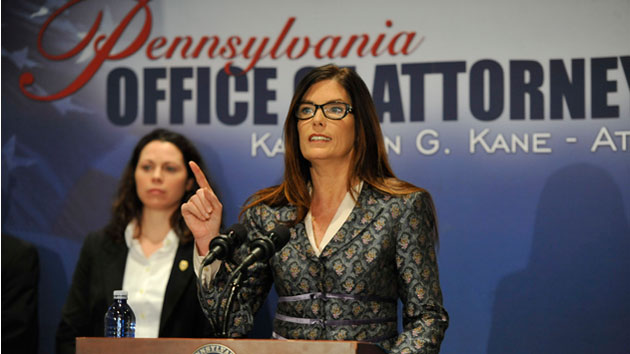 After an exhaustive, two-year investigation, a statewide grand jury has determined that hundreds of children were sexually abused by priests and other religious leaders serving the Roman Catholic Diocese of Altoona-Johnstown in western Pennsylvania over at least 40 years.

The grand jury issued a 147-page report, made public today, that details widespread alleged abuse involving at least 50 priests and religious leaders, and the findings include accounts of how Diocese superiors took action to conceal the accusations in order to protect the Church’s image.

“The heinous crimes these children endured are absolutely unconscionable,” said Pennsylvania Attorney General Kathleen G. Kane, who spoke at a news conference today in Altoona, a small city located two hours east of Pittsburgh. “These predators desecrated a sacred trust and preyed upon their victims in the very places where they should have felt most safe.”

In April 2014, the Office of the Attorney General brought the matter to the State Investigating Grand Jury. None of the alleged criminal acts detailed in the report can be prosecuted at this point because many of the alleged abusers have died, the statute of limitations for these crimes has passed, and many of the victims are too “deeply traumatized” to testify in court, according to the Office of the Attorney General.

The news comes comes two days after the movie Spotlight won the Academy Award for Best Picture. The film is about the Boston Globe‘s 2001 investigation of the Catholic Church’s long history of sexual abuse, particularly in Boston parishes.

The investigation in Pennsylvania is ongoing, Kane said.

“We will continue to look at this matter and consider charges where appropriate, which is why it is so important for those with information to come forward,” she said. “At the very least we must continue to shine a light on this long period of abuse and despicable conduct.”

During the investigation, the grand jury reviewed more than 200 exhibits and heard hours of testimony from numerous witnesses, creating thousands of pages of transcribed testimony. A search warrant executed at a Diocese office in August produced what the report calls a “secret archive” of files for priests who had been accused of sexual misconduct, as well as internal correspondence between bishops and the accused priests. In all, the grand jury removed over 115,000 documents from the Diocese.

The report names several of the priests accused of sexual misconduct, as well as Bishops Joseph Adamec and James Hogan, two Church superiors accused of allowing priests accused of sex abuse to remain within the Church. In one case where a priest was accused of groping the genitals of at least 15 boys, Bishop Hogan allegedly met with prosecutors, but no charges were ever filed. The accused priest was transferred to work as a chaplain in a West Virginia hospital.

In a statement on Monday, the Diocese said it had “cooperated fully with authorities throughout the investigation, and will continue to do so as part of our commitment to the safety of all children. At this time, the Diocese is reviewing the report.”

“This is a painful and difficult time in our Diocesan Church,” said the Rev. Mark L. Bartchak, bishop of the Diocese of Altoona-Johnstown. “I deeply regret any harm that has come to children, and I urge the faithful to join me in praying for all victims of abuse.”

The area incorporated by the Altoona-Johnstown Diocese spans eight counties in the state and is home to more than 90,000 Catholics. Cambria County District Attorney Kelly Callihan referred jurisdiction of the matter to the Office of the Attorney General, which conducted the investigation with the help of the FBI.